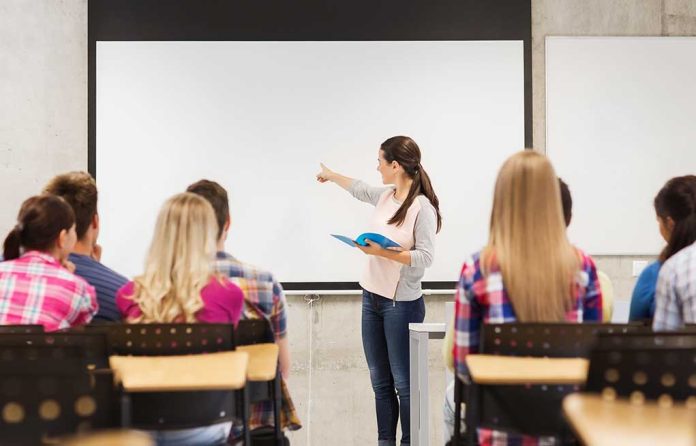 (RightWing.org) – Did the government overplay its hand during the pandemic? While politicians locked down Americans for months at a time in 2020, there might have been one benefit. For the first time, parents could hear and observe what teachers told their children. Many were appalled at how schools undermined them.

For nearly a year, Democrats, teacher unions, and school districts claimed that Critical Race Theory (CRT) was not a part of the public school curriculum in many areas of the country. Yet, parents inherently knew that wasn’t true. Too many media reports came out of parents saying their children repeated claims they were privileged or oppressors. Some school districts denied many parents the right to even view a teacher’s curriculum. We’re learning that’s a violation of a 2002 federal law. Parents do have a right to it, and they can expose that educators teach CRT in public schools.

At the heart of the backlash against CRT is a pushback by parents against arrogant politicians, school administrators, and teachers who believe they can teach students whatever they want – and that parents have no say in the matter. That line of thinking led to the Nationals School Boards Association labeling upset parents over CRT as domestic terrorists, prompted the US Justice Department (DOJ) to surveil parents, and got Democrats thrown out of office in Virginia from the governorship on down last November.

Educators rarely use the term Critical Race Theory, but that doesn’t mean it isn’t subtly present. Many upset parents want answers as to why their children are being taught they’re racist. In Rhode Island, one mom demanded answers from the school board who told her to file a Right to Know request for curriculum. The school stonewalled her, and the teacher’s union sued her over teacher privacy.

However, is there such a thing as teacher privacy when it comes to public school curriculum? Not if the school receives federal funding from the Department of Education. The Protection of Pupil Rights Amendment, 20 U.S.C. § 1232h, is one of the least known, yet most effective tools in parents’ hands.

If a public school receives federal funding, the law says that schools must disclose instructional materials used as a part of the curriculum. That includes all instruction materials, teacher manuals, films, tapes, or other supplementary materials.

Here’s the catch… First, schools are not obligated to freely give away this content. Parents must request it invoking the federal law. Be aware that school districts and their attorneys may not know this law exists and could fight you. If so, there are legal consequences according to the federal statute. Second, don’t just request materials on CRT. Also, ask for materials related to Social-Emotional Learning. Companies that provide training information to use curriculum often tie social and emotional learning to racial justice issues and aspects of CRT.

It is rarely obvious in the curriculum that CRT is taught in public schools. Yet, sometimes it is blatant. In January, The Federalist got copies of a syllabus straight off Georgia’s largest public school district’s website. It was hiding in plain sight.

The syllabus stated, “Students will bridge the skills from AP Language to AP Research, analyzing the value of using different lenses in social criticism (Critical Race Theory, Feminist, Marxist, Psychoanalytic) to aid their analysis across issues, and the class will discuss how these perspectives apply to the different methods used by research fields.”

Public education is supposed to teach kids reading, writing, math, science, civics, and history. It should prepare students to enter an evolving workforce and equip them with the skills needed to be good citizens. Most importantly, it should be a compliment to parental lessons. The Supreme Court (SCOTUS) repeatedly stated that parents have the ultimate authority regarding their child’s education. Kids aren’t wards of the state to do with as public school administrators wish.

So, will schools get back to teaching what’s important to America’s future?

That’s up to parents.