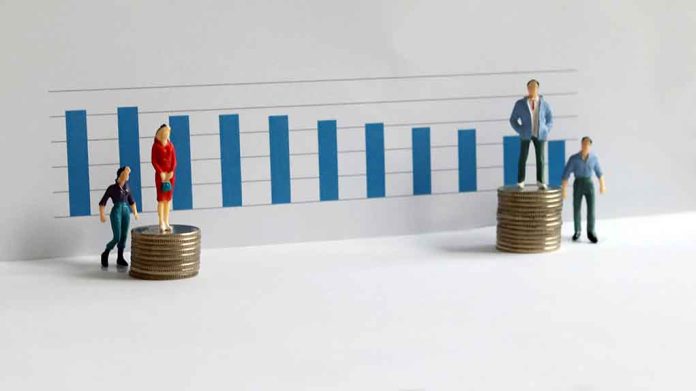 (RightWing.org) – In the 1860s, the pay gap between men and women emerged as a political issue labeled “Equal Pay for Equal Work.” Women’s rights activists Susan B. Anthony and Elizabeth Cady Stanton helped expose the issue. By the 1940s, there was one attempt to solve the problem legislatively, but it ultimately failed. In 1963, Congress passed the Equal Pay Act. Still, it gave exceptions for pay differences between female and male workers.

In 2020, then-Democratic presidential nominee Joe Biden promised to close the gender pay gap. Yet, on July 1, the White House released a salary disclosure report showing that he did not manage to accomplish the fete, even in his own administration. The question is, why? Is there a good reason the pay gap exists?

The information revealed females earn $16,000 less per year than the median salary of their male counterparts in the White House. The 16.5% discrepancy is in line with the Federal Reserve Bank of St. Louis study from 2011 and a statement by President Biden in a Proclamation on National Equal Pay Day speech in March. In it, he said women, on average, made 83 cents on the dollar in 2020 compared to their average male counterparts.

The current White House list details the salaries of 173 men and 235 women. It didn’t include those who worked at other government agencies and temporarily served at the White House.

Despite Biden’s best efforts, the gap still exists. In June 2021, the president signed an executive order instructing the Office of Personnel Management (OPM) to conduct a review of compensation and report back on how to create equal pay. In March, the administration announced a fact sheet committing to:

Why Does the Pay Gap Exist?

According to a recent study, several factors play into the pay gap, and it ultimately said the gender pay gap closes to within one cent when accounting for job titles, experience, education, job level, industry, and hours worked. The White House data showed more women than men earned the maximum salary of $180,000.

Mark Perry, an economist at the University of Michigan and senior fellow at the American Enterprise Institute, told the Washington Free Beacon the gender pay gap is the result of many factors. He argued the administration’s 17% salary gap would decrease significantly if the men’s and women’s incomes were compared apples-to-apples. He noted when salaries take into account numerous variables, it shows the pay gap doesn’t have anything to do with gender discrimination. The economist stated the administration was irresponsible in justifying the policy proposals.

Do you agree with Perry’s assessment?