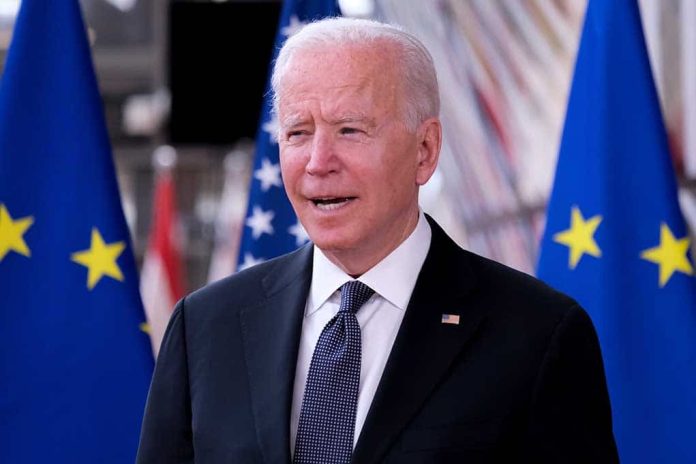 (RightWing.org) – For nearly 15 months, Democrats in communities across America accused the police of systemic racism. Despite many in the community not wanting it, the Democrats slashed police budgets and waged war on law enforcement. As a result, many peace officers retired or resigned in protest. Criminals were given free rein and little accountability. The result was a massive spike in crime. It was predictable and completely unavoidable.

On June 23, President Joe Biden announced a program to hold the wrong people accountable for the crime. He went after law-abiding gun shop owners who are overwhelmed with burdensome regulations and paperwork before someone can purchase a firearm. Holding the wrong people accountable may look like Biden’s doing something to fight crime, but to most people, it’s obvious that the tail was wagging the dog. On Monday, July 12, Biden finally came and did what he should have done, to begin with, and encouraged communities to refund their police departments. Interestingly, the president urged them to do so with tax dollars from the COVID relief package the Left passed.

How will that fly?

Biden Breaks with the Left, Again

In 2020, then-Democratic presidential candidate Joe Biden went back and forth. One moment he was defunding the police, and the next, he wasn’t. Who knew what to make of old Joe’s thinking? On July 8, 2020, Biden agreed that funding needed to be “redirected” away from police. Sensing blood in the water, his campaign immediately contradicted him and said the police should not be defunded. Then Biden himself contradicted the previous statement and said he would give more money to the police.

Since then, he’s remained silent on the matter. That is until Monday, July 12. The president said it would take various approaches to fight the growing crime problem across America. Biden doubled down again on slowing gun sales. However, he added that cities should hire more police using the American Rescue Plan (aka COVID-19 relief passed on a partisan vote in March). The president added that community policing is an investment “in community violence intervention.”

That runs smack in the face of the Left in his party. It’s hard to imagine they envisioned Biden doing this when they recklessly passed the American Rescue Plan. Congress wrote the law so loosely that municipalities can use the millions of federal taxpayer dollars virtually any way they need or want. Its purpose was to keep cities afloat until the pandemic ended.

The GOP must be laughing hysterically — and for a good reason. While Republicans united against the legislation because it wasn’t needed, if cities follow Biden’s lead, it would be a slap in the face to the Left and an “I told you so” moment heading into the 2022 midterm elections.

It would be a watershed moment for Democrats as Republicans expose them for their recklessness and make the point that Democrats can’t be trusted to run America. Look what they do — and the leader of their party agrees with the GOP.

It’s about to get real in the Democratic Party. Biden’s timing could be so divisive that it could divide Democrats and cause more infighting. That could hurt their chances of passing their infrastructure proposals.