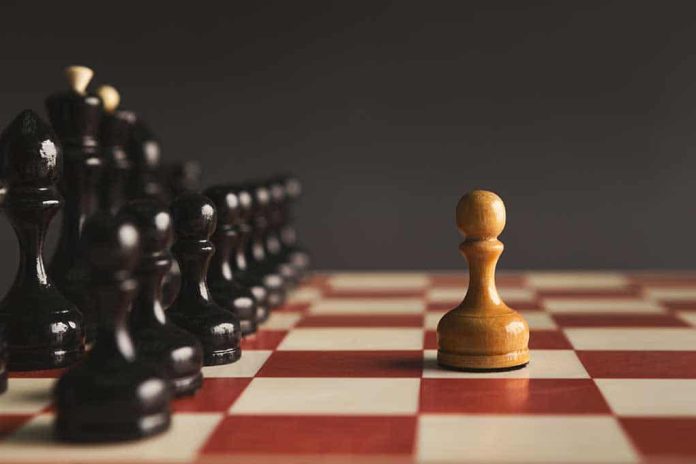 (RightWing.org) – In an evenly divided Senate, every Democrat vote matters. If one Senator defects or goes rogue, it’s lights out for any piece of legislation. That’s an incredible amount of pressure on one person who could face the wrath of the far-left intent on radically overhauling America’s governmental, economic, and moral foundation. It’s also a great opportunity for one Senator to portray himself as something he’s not.

Sen. Joe Manchin (D-WV) is the cog that can insert himself into the wheel anytime he sees fit. However, he can be a metamorphosis, or perhaps it’s just smoke and mirrors? After all, he is still a Democrat, and Democrats tend to stick together, one way or another. It’s not often that one bucks the party’s leadership. So, will Manchin cave in light of his most recent break with the party, or will he stay true to his word?

While Manchin often states publicly that he doesn’t agree with some of the Left’s agenda, his actions are a bit dubious. He rarely votes against his party, even on far-left cabinet picks and legislation.

Yet, there are times he takes a stand. For example, he rebuffed the $15 minimum wage effort by the Left in the COVID-19 relief package in March. However, he didn’t need to get far into the trenches because the Senate parliamentarian offered him cover when she ruled that the provision didn’t qualify to be part of the reconciliation package.

In addition, Manchin was largely responsible for Biden pulling one of his most controversial cabinet picks. Neera Tanden couldn’t gain support to lead the Office of Management and Budget (OMB). However, Manchin’s objection wasn’t her radical policies. It was her previous personal attacks on himself and some Republicans. If it weren’t for that, he likely would have voted for her.

After all, he voted for Pete Buttigieg for Transportation Secretary despite having no experience and espousing a radical Green New Deal view of infrastructure. Or, what about Beccara Xavier for Health and Human Services secretary? He has some radical abortion views.

So, Manchin appears moderate, but is he?

On Monday, April 5, Manchin said he opposed Biden’s plan to raise corporate taxes. Note, he doesn’t oppose Biden’s or the Left’s radical green initiative. He opposes how to partially pay for it. He doesn’t want taxes to go up to 28% for corporations and make them globally anti-competitive. He said he’s for a corporate tax increase from 21% to 25%, and closing tax loopholes on the rich.

So, there you have it. He looks moderate from a distance. However, Jupiter doesn’t look very large in another galaxy either. A closer look reveals that Manchin is still a Democrat and that he will often give them what they want if he can manipulate deep-red West Virginia into believing he represents their interests.

Will Manchin cave? Politics is a shell game. The senator won’t be perceived as caving if he presents himself properly. Meaning, he might prevent taxes from going too high. However, he won’t stop the final intended result. So, in the end, what’s the difference?