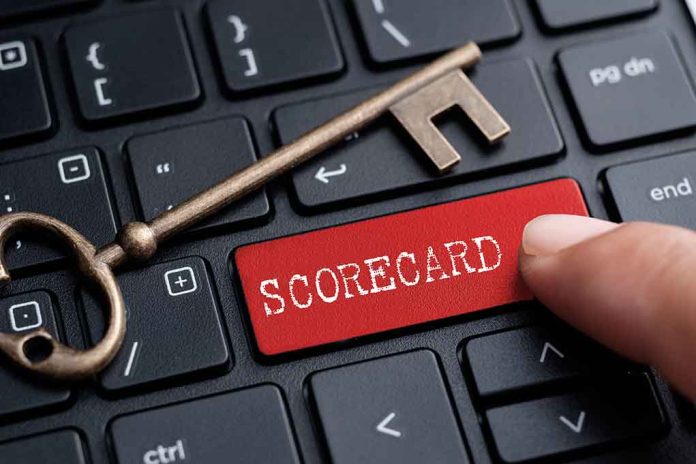 Why The ESG Score Is So Dangerous For Capitalism

(RightWing.org) – America’s economy was founded on the principles of capitalism. It’s an economic and political system where private owners control trade and industry for profit instead of the government. Supply and demand dictate prices, and in turn, businesses meet the needs of customers. It appears some in the Democratic Party have moved away from this idea.

Still, society as a whole isn’t embracing the Left’s view of how to control the economy. Now, it appears Progressives have found a way around their problem with the public. Instead of using government to dictate terms, they are using businesses to do their dirty work through a system known as Environment, Social, and Governance (ESG). Andy Puzder, a visiting fellow at the Heritage Foundation, told The Epoch Times it’s nothing more than socialism presented as capitalism and stated it’s dangerous to America’s economic system.

Environmental, Social, and Governance Is a Threat to Capitalism

How is ESG defined? Companies create and follow a set of standards, and investors use them to determine if they align with their values before making an investment. It stands for:

E – Environment: How does a company address climate change?

S – Social: How does a company manage its employees, customers, suppliers, and communities?

G – Governance: How does a company handle its leadership, executive pay, internal controls, and the rights of shareholders?

On the surface, this may sound good to many people. What’s wrong with protecting the environment, ensuring social fairness, or making sure businesses are responsible?

Yet, Puzder says ESG is a model of investing that seeks to fulfill a left-wing political agenda instead of meeting the needs of workers or consumers through supply and demand. He says corporate elites at large financial firms buy large shares of companies, become significant owners, and make demands on those they invest in.

The Heritage fellow noted, while the government isn’t directly involved, the corporate elites work with government regulators to push far-left environmental, social justice, and other policies. Pudzer noted the threat to capitalism occurs when investors use their shareholder power to force corporations into complying with a radical agenda, thereby placing political objectives above the company’s obligation to its customers and other shareholders.

Pudzer stated that, recently, environmentalists not aligned with Exxon-Mobil were put on the board of directors by large investment companies. Now, environmentalists, who may care more about a political agenda than company profits, have a say in the direction of the oil firm.

Environmental and Social Justice Agendas More Important Than the Economy

Pudzer noted Critical Race Theory (CRT) is becoming an accepted part of ESG in companies. He stressed business leaders are indoctrinating employees and making hiring decisions based on race or gender instead of merit and qualifications.

Not alone in his criticism, bank CEOs faced harsh words at the Annual Oversight of the Nation’s Largest banks hearing on Capitol Hill on September 22. Republican lawmakers warned them to stop embracing ESG. Sen. Pat Toomey (R-PA) said the philosophy harms the country, and stated financial firms are out of line when they start trying to control people’s spending or weigh in on non-banking issues such as abortion or guns. He said it was striking that bank leaders often seem to side with the Left on social and political issues.

So, who’s benefiting from ESG? Will it be average investors with 401(k)s who rely on a company’s performance for their retirement, or will left-wing activists benefit at their expense?