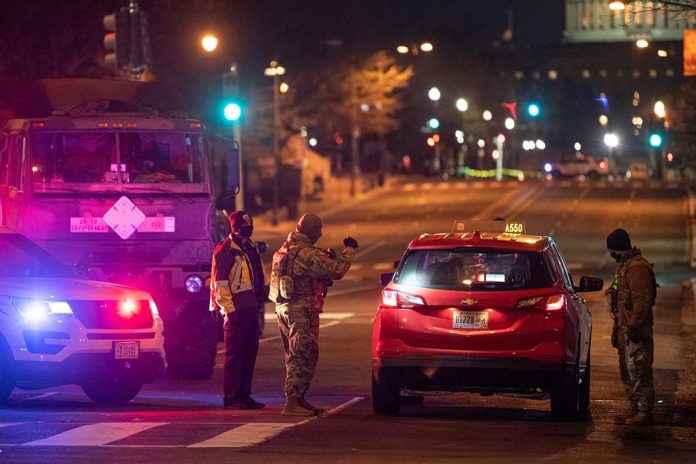 (RightWing.org) – It’s one day before the inauguration of Joe Biden, and there is a massive military presence in Washington, DC. The Pentagon says up to 25,000 National Guard soldiers from all 50 states and Puerto Rico are present. That’s far more than the 2,500 military men and women stationed in Afghanistan.

So, what’s this all about? According to Democrats, it’s about protecting the inauguration, Joe Biden, and the capitol against another “insurrection.” However, is this kind of show of force really necessary? At no other time in US history was the Capitol this militarized. Not in the Civil War, not in the massive 1968 riots, nor any other time.

What is the Military Buildup About?

In April 1968, President Lyndon Johnson ordered approximately 12,000 Army troops to Washington, DC in the wake of massive riots. The city was literally on fire as race riots broke out shortly after the murder of Martin Luther King Jr. A thousand people were injured that day, and 13 died.

What happened on January 6 paled in comparison to the devastation of 1968. Yet, Americans are expected to believe this was the worst event in American history. It wasn’t. That doesn’t excuse what happened a few weeks ago. There are no defensible answers, and lawbreakers should be held accountable through the judicial system.

However, according to Fox News host Tucker Carlson, this military show of force is about control. It’s not about safety. It’s a strong message Democrats are sending America. “We’re in charge now.” This is about the hostile political takeover of one party in America.

Washington, DC is normally the most protected city in America. It has a massive law enforcement presence that is generally ready for just about anything, and at any moment. What happened at the Capitol building was a result of not listening to warnings. Congress paid no attention to its own security, and the DC mayor refused help from the Pentagon when it was recommended to her days in advance of the protests.

The military presence ahead of the inauguration is meant to intimidate and deter protests. It’s designed to stifle free speech. What’s worse is it appears to be working.

The founding fathers warned against using the military against its own people. On April 4, 1783, George Washington said that “the army… is a dangerous instrument to play with.”

Perhaps James Monroe said it best in a message to Congress on May 4, 1822: “Our Union is not held together by standing armies, or by any ties, other than the positive interests and powerful attractions of its parts toward each other.”

Therein is the key. There is nothing positive coming from the message out of Washington, DC. America is not being held together out of patriotism and love of country. It’s divided deeply. The only way for Democrats to hold it together is to use the military cloaked in patriotic speech.

Perhaps Tucker Carlson is right… this is nothing more than intimidation.