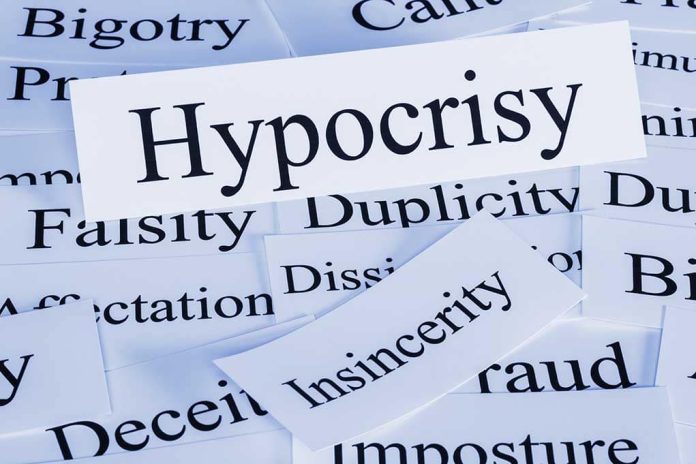 (RightWing.org) – Once again, either incompetency or raw corruption is rearing its ugly head inside the Biden Administration. For the past six months, illegal immigration has steadily grown to historic levels as migrants make the long and dangerous journey from Mexico and Central America. They claimed they were coming because Joe Biden welcomed them. So many illegal immigrants are entering the southern border that the administration re-opened detention facilities closed under former President Donald Trump’s watch.

If the problem wasn’t already bad enough, the administration allowed hundreds of people with COVID-19 to enter the United States. It happened in March, so why the shock now? Two federal government Health and Human Services (HHS) employees are blowing the whistle on the Biden administration’s blatant hypocrisy.

Revelations about the administration’s flippant attitude toward illegal immigration and COVID-19 come as the Centers for Disease Control and Prevention (CDC) wants Americans to mask up again to protect against the Delta variant.

On Wednesday, July 28, a complaint was filed with four Congressional committees and government watchdogs by the nonprofit Government Accountability Project. HHS employees Arthur Pearlstein and Lauren Reinhold served at Fort Bliss, Texas, earlier this year. What they say is happening in migrant detention facilities is shocking and disturbing.

While the federal government is seeking to control Americans and force them as much as possible to mask up, COVID ran rampant among migrant children and HHS employees at the detention facility. The whistleblowers claim overcrowded conditions, a lack of masks, and a lack of mask policy enforcement contributed to problems that HHS officials didn’t want the public to know about.

The two whistleblowers allege that HHS public affairs specialists regularly provided written instructions to make it appear that all was well in Fort Bliss. The complaint added that the federal agency made every effort to downplay COVID infections and deliberately keep the outbreak secret.

Why Should Americans Trust the Government?

The worst part is the HHS response to the story. The agency released a statement about how well it takes care of the children in its custody. Really? It sure doesn’t sound like they are taking care of the children. It sounds like grounds for investigating child abuse.

A chief responsibility of the government is to be honest with its citizens. Over the last six months, the Biden administration has been anything but truthful. Last spring, the president openly lied about Georgia election reform laws. He regularly says Democrats aren’t for defunding the police when they are openly transparent on camera. That’s exactly what they want to do.

The president said Facebook was killing people. On Tuesday, July 27, Joe Biden insulted half the country when he told the unvaccinated are not as smart as he thought.

The lies and insults are growing longer than a train passing through town during rush hour.

Now, the Biden administration is openly allowing illegal migrants to flood into the country and spread COVID-19 while asking citizens to pay the price physically, mentally, emotionally, and financially.

How is America supposed to trust its leaders when they lie, cover up the truth, and hypocritically contradict themselves? This issue comes with real consequences to American lives and prosperity.

America deserves a government that is responsible and accountable. All this one seems to want under the Democrats is to rule over the people.

The two whistleblowers are heroes for their bravery!