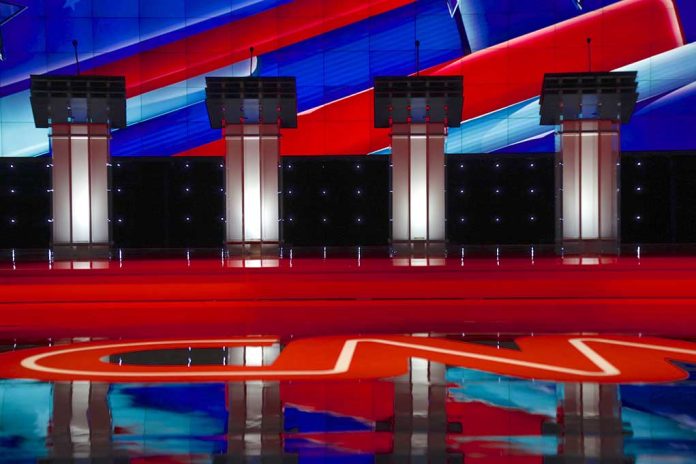 (RightWing.org) – For political observers, debates are a time-honored tradition in US elections. They have occasionally made or broken a candidate. In some instances, they can even impact future elections. In 1858, Abraham Lincoln and Stephen Douglas met in a series of talks as they campaigned for a US Senate seat. While Lincoln ultimately lost, it set the stage for the upcoming presidential race — and the rest was history.

In 1960, television changed the medium forever. A boyish-looking John F. Kennedy (D) looked superior next to a washed-out Richard Nixon (R). Those who listened on the radio said Nixon won, while those watching on television declared Kennedy the winner. Ultimately, Kennedy won the election. In 1984, Ronald Reagan (R) used the format to seize his election chances. He exposed Democratic presidential contender Walter Mondale’s lack of communication skills and command of the issues through one-line comments that people still talk about to this day. Yet, it appears that candidate one-on-one interactions are losing their zing. Is it because of hyper-partisanship, or is there more to it?

Are Politicians Avoiding One Another?

In 1984, Reagan answered a moderator’s question by saying he wouldn’t exploit Mondale’s youth for political purposes. It caused the audience to explode in laughter and, to this day, is one of the most remembered debate lines in American history.

Over the last decade, American politics have become extremely divided along partisan lines. Some openly question if debates even move the needle among voters any longer. Yet, perhaps other politicians don’t want a challenger to ask about past statements.

In Pennsylvania, Georgia, and Arizona, members of both parties are avoiding the scrutiny of personal interactions heading into the November elections. In Pennsylvania, Democratic primary voters nominated a far-left Democrat for US Senate: John Fetterman. His GOP challenger, Dr. Mehmet Oz, has derided Fetterman for his refusal to spar, though the Democrat said he would agree to one appearance on a stage with Oz. The question is, when?

The Pennsylvania Senate race is turning into a commercial back and forth. The two candidates are airing ads extolling their virtues but are also running spots trashing each other. Will these efforts break through and make a difference? Are Democrats intent on voting for their own, and vice-versa among Republicans? Are Independents really independent?

Fetterman is far from alone. In Georgia, Republican Hershel Walker is so far avoiding scheduling a debate. Rep. Ted Budd in (R-NC) in North Carolina is also taking his time. Likewise, in Arizona, Democratic gubernatorial contender Katie Hobbs has declined to take a stage with GOP hopeful Kari Lake.

Why Are Politicians Avoiding Debates?

You can likely chalk up the lack of political stage encounters as a change in campaign strategies. In today’s environment, candidates may not want to defend their past statements or views and feel the risk is much greater than the reward. The socialism, crime, and defund the police argument against Democrats is a powerful one in some voter circles. Republicans may not want to play defense over the insurrection label or deal with “extremism” allegations. Pushing back against such issues may not work well in sound-bite live wranglings.

In other instances, a campaign may not want to give a chance to an opponent to gain positive publicity. Debating is a unique skill set, and in today’s modern world, it doesn’t happen as much face-to-face as it does over a computer. It’s becoming a lost art form.

Some say the absence of debates could be the future of campaigning. Candidates seem more interested in town hall meetings talking with voters than debating one another. So, the days of a candidate turning an election over a one-liner may end.

Perhaps many candidates feel there is more to lose than gain by participating in debates.

So, do they even matter any longer?

Would voters change their minds based on a debate?