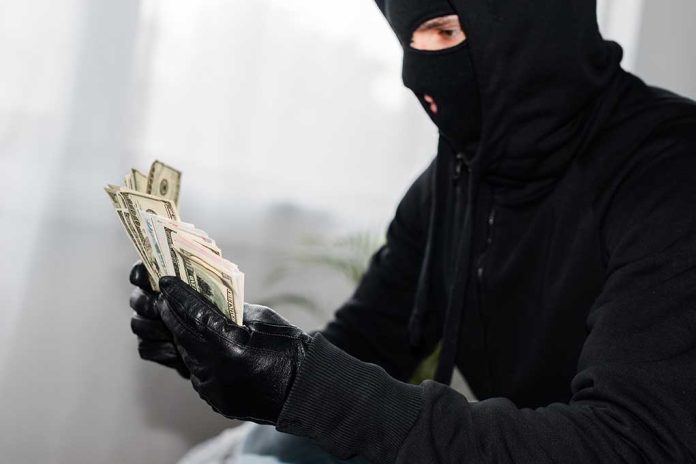 (RightWing.org) – Is it possible to be a good taxpaying citizen and a thief at the same time? According to federal law and the IRS, that’s what the government expects of anyone who commits a crime. On the surface, it appears to defy logic and reason. Why would someone self-report stealing to the IRS for tax purposes?

The law precedes prohibition, and it seems outrageous without context in today’s world. After all, Democrats propose allowing the IRS to access your bank account if a deposit or withdrawal exceeds $600. That certainly defines government overreach and is scandalous for a host of reasons, starting with its none of their business how one spends their money. We’re supposed to be innocent until proven guilty, but that isn’t how Democrats operate as they spend trillions of dollars and desperately use taxpayer money to pay for their big government programs.

Let’s get this straight. Did you manage to steal some expensive jewelry? How about a television? It’s hard to imagine that drug dealers or moonshiners would be willing to self-report their profits from illegal activities. Thieves are thieves… most aren’t in the business of creating a paper trail.

According to Schedule 1 (Form 1040), line 8z, or on a self-employment Schedule C (Form 1040), the IRS says that if you steal property, you’re required to report its fair market value and pay taxes on it so long as you don’t return it to the rightful owner in the same year.

Between Christmas and New Year’s, news of the IRS regulation managed to go viral. That’s par for the course after the year Democrats put America through. It was one outrageous thing after another, from President Joe Biden’s war on energy that sparked inflation to the insane semi-socialist legislation that would put America on a path to greater government control over our lives. It seemed there was no shortage of things the Left wouldn’t come up with, and except for two Democratic Senators, America might look very different heading into 2022.

It’s An Old Law With a Different Purpose

When the proposal to report the fair market value of theft, extortion, bribes, or prostitution, among other things, passed into law nearly a century ago, Congress wasn’t naive enough to believe criminals would self-report their income. Instead, the law had another purpose. It was a way to catch criminals when law enforcement couldn’t prove the original crime.

Thanks to illegal activities, Al Capone was worth over $1.5 billion in today’s money. Law enforcement couldn’t get murder charges and gang activity to stick legally. However, they charged him with tax evasion when prosecutors alleged his income didn’t match his lifestyle after he arrogantly bragged that the government couldn’t collect taxes on illegal money. While prosecutors use the law similarly today, it also has the effect of forcing potential convicts to report their illicit proceeds to avoid another prosecution on tax evasion.

The key to avoiding getting caught in the trap is not to participate in illegal behavior. It seems like common sense, but it sometimes doesn’t kick in until the government leverages the law against wrongdoers.