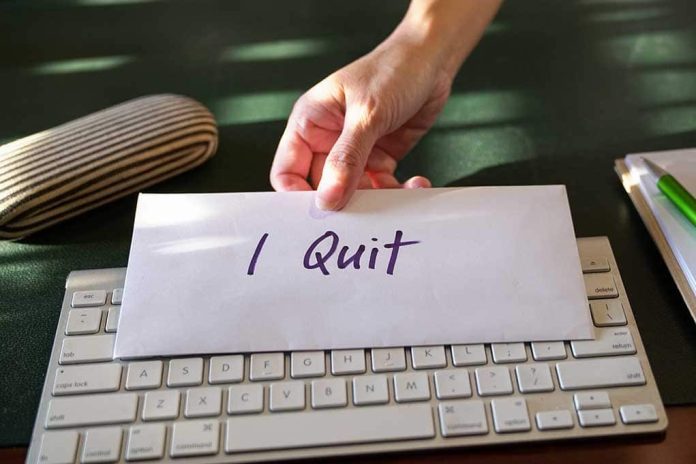 (RightWing.org) – The United States is at a unique moment in time. For decades, employers held all the cards. That was beginning to shift under former President Donald Trump as the economy created more jobs than there were people to fill them. Across the board, wages rose and companies added benefits to entice people to work for them.

In March 2020, the COVID-19 pandemic hit hard. Tens of millions of Americans were suddenly without jobs, and they had a lot of time on their hands. With nowhere to go and no place to spend money, many took their enhanced unemployment benefits, stimulus cash, and other government cash benefits and socked it away. Now that the economy is open and unemployment benefits expired in September, many economists believed people would stream back to the workplace. That didn’t happen. In fact, the opposite is occurring. Workers are quitting in record numbers, and some are calling it the Great Resignation.

4.4 Million Americans Walk Away From Jobs

On Friday, November 12, the Labor Department reported that the number of people quitting their jobs exploded to 4.4 million. It comes as 7 million are collecting unemployment benefits, 100 million are no longer participating in the labor workforce, and 10.4 million jobs are open. Currently, we are in unchartered territory. Under Trump, America was experiencing high employment numbers, and employers were competing for those who wanted better career options, higher wages, and better benefits. In short, people were transferring between job opportunities.

It’s clear that this is an entirely different situation. During the pandemic, people stuck at home had a lot of time to reevaluate what work meant to them and what they wanted out of life. This is astounding in a country where work is often part of one’s identity and people work more hours than most other industrialized countries. In 2014, a Gallup survey said salaried workers put in 49 hours per week, and all worker’s hours went up, not down.

Many walking away from jobs are in lower-paying, lower-status jobs such as entertainment, leisure, hospitality, and retail. Some people are simply retiring or returning to school to acquire degrees or new skills. For others, childcare during a pandemic is a struggle. There are also numerous stories about people leaving to take advantage of the gig economy, work on their own terms as they reject traditional forms of work.

Not frequently discussed are the impacts of local, state, business, and federal vaccine mandates. Some people will refuse to get vaccinated. While they have cash on hand, some may feel it’s time to explore other options.

The reality is that work in America post-pandemic is changing. The political, economic, technological, and societal changes are all part of the equation. For some time, these forces threatened workers’ futures, but perhaps this is the time when America resets and learns we are dependent on one another for a brighter, more hopeful tomorrow.