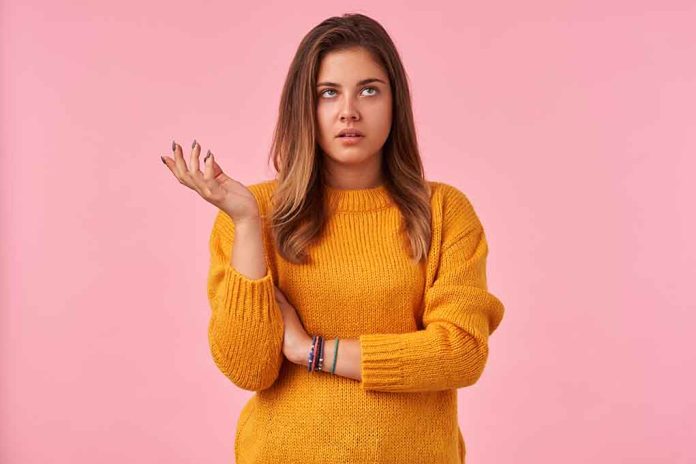 (RightWing.org) – How far out of step can President Joe Biden and his administration get with America? It’s hard to know where the basement is in this free fall. Nonetheless, on Monday, January 24, the White House finally admitted something that anyone with a lick of common sense already knew.

White House Press Secretary Jen Psaki fell prey to the facts. That didn’t mean she liked it or didn’t resort to another issue to deflect from a painful reality. Since 2020, crime in America has exploded. Many experts point to far-left Democratic-led cities that defunded their police departments, and rogue prosecutors who refuse to hold criminals accountable on the assumption their crimes occurred because of systemic racism. Psaki admits that surging violent crime is partially happening because cities defunded their police.

Has America experienced a more weak-kneed leadership in the White House? Biden can sound angry and strong when his far-left senses are insulted by genuine questions. Make no mistake, it’s a facade. President Biden and his administration are good at lobbing insults, name-calling, and dividing America, but that appears to be about all they have in the way of leadership, if that’s what one wants to call it.

For two years, crime continued to explode in major Democratic-led US cities, and few did much about it. On Monday, Fox News White House correspondent Peter Doocy asked White House Press Secretary Jen Psaki if the president knows Americans don’t feel safe after his first year in office. Psaki acknowledged the rise of crime and, after some prompting by Doocy, stated “underfunding” of some police departments led to the problem.

Psaki couldn’t even get herself to say Democrats defunded their police departments. Oh, but there’s more. She said the administration is throwing money at the problem. Still, the administration remained quiet while attempting to pass radical semi-socialist legislation and several fake voter rights bills.

So, while Americans focus on the economy, inflation, and crime, the administration focuses on passing Sen. Bernie Sanders’ (I-VT) socialist agenda.

And they wonder why their polling is upside down.

To be fair, there may not be much Biden can do to solve crime on a legal note. However, on a cultural note, he can set the tone if chooses to. Psaki revealed two means the White House sought to reduce crime on America’s streets:

Both are liberal responses to virtually every problem when it comes to crime, but it’s not a true solution. First, why would the administration throw money at local governments who’ve demonstrated they don’t believe in policing communities and won’t use it for that purpose?

In 2021, according to the National Review, at least 13 cities broke homicide records, all led by Democratic governors and city councils:

Psaki apparently believes most of the problem is guns. If the government would just eradicate the Second Amendment, she and Progressives believe there would be no crime.

Once again, weak leadership creates terrible results. Why isn’t the president calling out members in his own party who are harming public safety? Why isn’t he putting pressure on liberal local governments by using the bully pulpit and Air Force One to call attention to their bad behavior resulting in lives lost and families hurt?

It’s not all about guns. It’s about a culture of violence perpetrated by Democratic officials who are blinded by ideology over facts. Biden won’t tackle the issue head-on because it undercuts his gun, equity, and social justice narrative.

As evidenced by Psaki’s statement, perhaps the White House is coming around? Then again, it could be wishful thinking for those stuck in violent crime zones with nowhere to hide or escape.