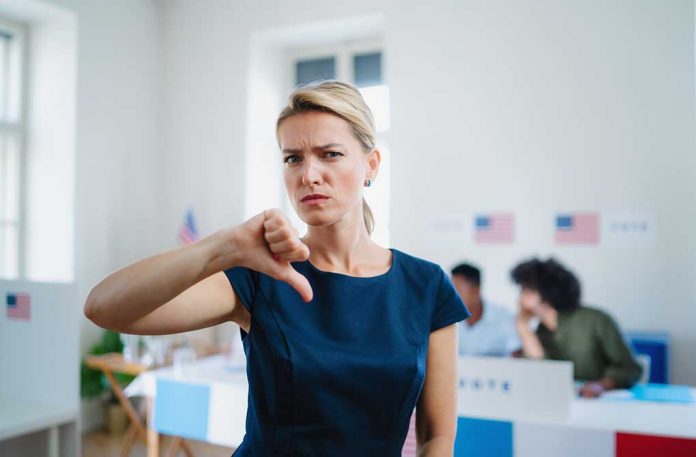 (RightWing.org) – It appears that the Democrats’ ship is taking on water. In August, cracks in the bow started to emerge. President Joe Biden’s approval ratings began tanking in the wake of the botched Afghanistan withdrawal and have never recovered. By mid-November, voters rejected Biden on virtually every topic, including COVID-19, the economy, inflation, foreign affairs, and immigration. On November 8, 2022, the ship should submerge once and for all if recent polling trends continue.

House and Senate Democrats argue that, like inflation, the polls are transitory. All they need to do to right the ship is pass the president’s $1.75 trillion semi-socialist and climate change Build Back Better agenda into law. Much like Democrats in Virginia and New Jersey, they are misreading the public sentiment. In the newest Quinnipiac poll, voters now say they are ready to put Republicans in charge of the House and Senate, and the numbers are growing.

Americans aren’t just souring on President Biden. They’re also wary of House and Senate Democrats. It makes sense. America is a center-right country. It’s not center-left, and it certainly isn’t progressive. In fact, only 25% of Americans profess to be liberals, while the large majority identify as moderate or conservative.

According to the November 18 Quinnipiac poll, 46% of voters want to see the Republican Party win control of the House, compared to 38% who prefer Democrats. Once again, the all-important independent voter says 41% to 31% want to see the GOP in charge of Congress. If these numbers hold or worsen for Democrats, a massive red tidal wave could overtake the country in 2022.

As usual, the devil is always in the details. Let’s contrast the House and Senate.

What’s Behind the Numbers?

There is a slew of data that reveals the headwinds Democrats face. The most revealing was a Gallup poll in mid-October that showed Americans do not want a bigger government; 52% percent of voters said the government is doing too much, and only 43% want the government to do more.

The polls are flying in the face of the Democratic narrative that they need to do something to regain voter support. On Friday, November 19, the House passed their massive $1.75 trillion Build Back Better semi-socialist bill. It appears that they are playing to the progressive base instead of the Moderates and Conservatives.

Don’t be surprised in the near future if the polls get worse for Biden and Congressional Democrats.