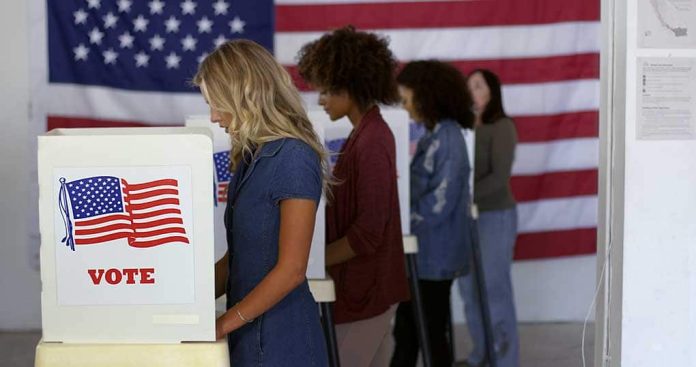 (RightWing.org) – After the 2016 election, Republicans began seeing a surprising trend that could create a balance of power moving forward in American politics. President Donald Trump won a larger share of the Hispanic vote than he expected. In 2020, he made slight inroads into the Black community. Many black Americans appear to be rethinking their allegiance to the Democratic Party for a reason unknown to many political scientists.

Even a small shift of Black voters could create a favorable environment for the GOP and a nightmare for the Democratic Party. In a September 23 poll by the Pew Research Center, President Joe Biden took a significant hit with black voters. The news is so bad for Democrats that it’s creating shock waves in the upcoming Virginia gubernatorial election.

Are Black Voters Reassessing Their Loyalty to Democrats?

It appears that Democrats will need to refine their target markets moving forward. Let’s look at why.

There’s an obvious and clear pattern developing that could change American politics.

In 2019, Pew found that 43% of black voters identified as moderate and 25% as conservative. Faith, economic responsibility, and hard work were values Black Americans most identified with in the poll. Democrats no longer hold to the same values. Instead, the Democratic Party is intent on pushing Americans into government dependency. If the $3.5 trillion proposal says anything, it’s that Democrats no longer value black voters. Some appear to be agreeing.

In Pew’s September 23 poll, Biden’s approval with black Americans collapsed. The president’s rating dropped 18 points to a low of 67% since July. That’s devastating news for a liberal party who claims they are the standard-bearers for the Black community.

Virginia Could Predict the Future

In the upcoming Virginia gubernatorial election, Democrats are doing something they haven’t done in a long time: courting black voters out of necessity. The latest statewide poll finds that Democratic candidate Terry McAuliffe and Republican Glenn Youngkin are statistically tied. In the last month, voter enthusiasm turned for Youngkin as 61% of Republicans are more excited about the race than 55% of Democrats.

In all elections, the final result comes down to who can turn out their voters. If enough black voters turn on McAuliffe, they could hand the Republican candidate a solid victory on the first Tuesday in November. If that happens, it’s likely too late for Democrats to turn the tide. They will become dependent on white suburban liberals, and there aren’t enough of them to ensure a dependable outcome for the Left in Congress year after year.

Compounding the problem, young black voters are very different from their parents and grandparents. Conservative black youths argue that Democratic policies harm their communities and that unwavering support is more about Blackness than solving problems. Some say they are still discussing the same issues from the 1960s, and Democrats are all talk and no action.

Black Americans will hold a lot of sway in upcoming elections. Which way will they tilt? It’s not a radical change that will occur overnight. However, the difference could be enough to tip the scales. Then, it’s up to the GOP to work on causes that positively impact black communities with conservative policies and earn a larger share of votes moving forward.

The opportunity is there as Democrats abandon black voters. Will Republicans step into the role and make the case?