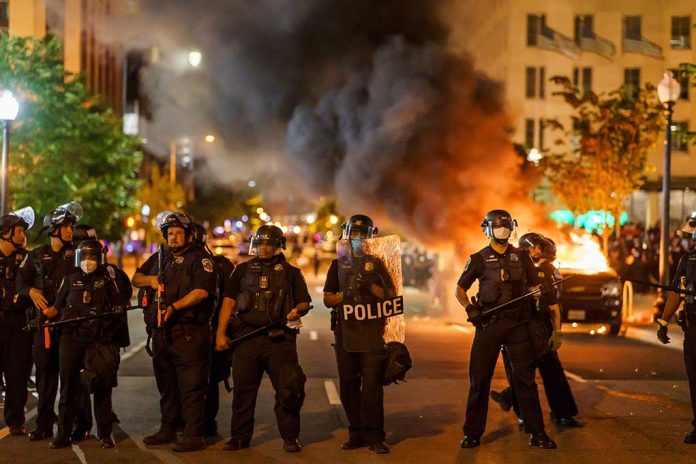 (RightWing.org) – On May 2, POLITICO published a February draft copy of a Supreme Court opinion indicating a majority of the justices will likely rule in favor of overturning Roe v. Wade (1973). Pro-life activists quickly reacted to the news by hitting the streets to protest in several US cities. The following day, a Los Angeles demonstration turned into a riot, complete with an assault on the police.

At 8:17 p.m. local time, Los Angeles Police Chief Michel Moore posted a tweet advising that his officers were accompanying a group of about 250 people marching the five blocks from the corner of South Broadway and West 1st Street to Pershing Park in downtown LA. He also advised drivers to expect traffic delays.

Receiving update on protest @ Pershing Square. A segment of the group began to take the intersection. We attempted to communicate, clear and provide dispersal order to the group. Crowd began to throw rocks and bottles at ofcrs . We have one ofcr injured( Unk extent). https://t.co/nYMbwTUsxj

Then, 49 minutes later, Chief Moore posted another tweet stating that protesters started taking control of an intersection. As he explained, police officers attempted to disperse the crowd, but to no avail. Continuing, Moore stated the group injured an officer but that the extent of their injuries was unknown.

Los Angeles: Law enforcement push back far-left pro-abortion rioters & try to make an arrest but are threatened by the mob. One of the militants police try to arrest escapes. Rioters smashed up a DHS vehicle. An unlawful assembly was later declared. https://t.co/nylvqmzkdS

What do you think? Is this violent clash a preview of coming attractions for future protests/riots this summer?