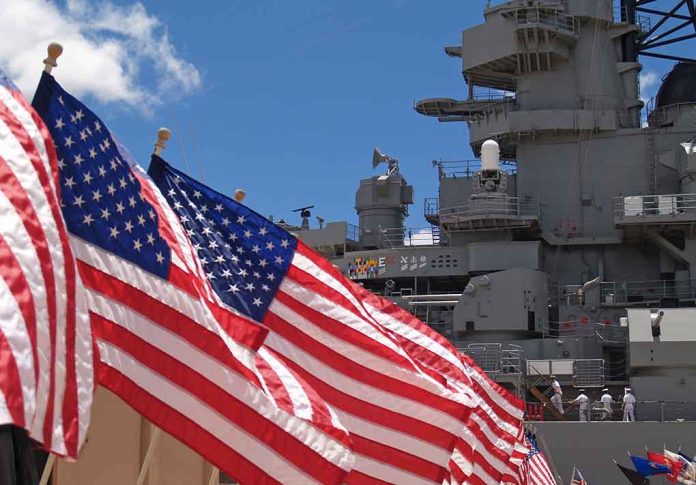 US Military’s Newest Mini Aircraft Carrier Is Powerful Beyond Words

(RightWing.org) – Presidents come and go, but the country’s defense strategy and the technological mechanisms that keep Americans safe continue pressing forward regardless of the competency (or lack thereof) of the current occupant of the Oval Office. For instance, the US Air Force recently unveiled a new sixth-generation stealth bomber, and the US Navy started using a state-of-the-art new aircraft carrier.

On November 29, the USS Tripoli (LHA-7) returned to Naval Base San Diego, the Pacific Fleet Surface Navy’s homeport, after completing its maiden deployment. The vessel spent the past seven months operating in the 3rd and 7th Fleets’ areas of operations. The 3rd Fleet patrols the northern and eastern areas of the Pacific Ocean, including the Aleutian Islands, the Bering Sea, and a portion of the Arctic Region. The 7th Fleet is headquartered in Japan’s Kanagawa Prefecture.

Technically an amphibious assault ship, the USS Tripoli is a Wasp-class large deck vessel designed to accommodate the F-35B Lightning II strike fighter jet and the Bell Boeing MV-22 Osprey tiltrotor aircraft. Both aircraft have vertical takeoff and landing capabilities. As a kind of miniature aircraft carrier, the Tripoli offers the element of surprise since it can maneuver in areas too small for a conventional carrier-class ship.

Rear Admiral James Kirk, the Third Expeditionary Strike Group commander, praised the USS Tripoli’s successful deployment. “The ship and crew are on the leading edge,” he stated, adding the new vessel is testing the limits of assault ships.