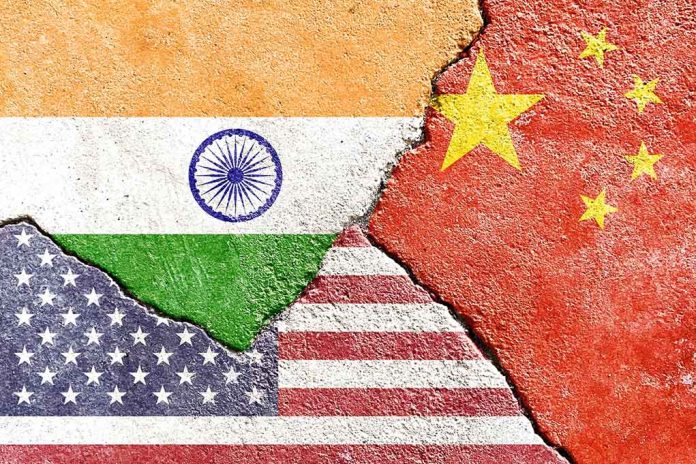 (RightWing.org) – China and India have long disputed a 2,100-mile boundary between the two countries. Known as the LAC (line of actual control), the region recently became a point of contention as the Chinese People’s Liberation Army (PLA) and Indian forces scuffled on Friday, December 9, in Tawang, an eastern town in Arunachal Pradesh. Beijing claims the state belongs to it as part of Tibet. India disagrees.

In 1996, the two countries signed an agreement regarding how the two sides would handle the disputed border. Article I states neither side would use its military in the LAC against the other to resolve the conflict or exert power that would “undermine peace, tranquility, and stability” along the border areas. Now, it appears China believes India violated the agreement, and the US government is fully backing its ally against Chinese aggression.

A New Layer of Mistrust Grows

Both countries are nuclear powers. Still, minor incidents along the border aren’t uncommon. The December 9 incident was the first since June 2020, when four Chinese and 20 Indian soldiers died in a skirmish. India’s defense chief, Rajnath Singh, told parliament that with the latest event, the PLA tried to “unilaterally change the status quo” along the contested border by crossing it.

On Tuesday, the Chinese military contradicted the foreign ministry, which said the border between the two adversaries remained “generally stable.” PLA Western Theater Command, Col. Long Shaohua, said the army was conducting a routine patrol when Indian forces illegally crossed the LAC. Long stated the troops brought the encounter under control in a professional but resolute manner. He called on New Delhi to control its forces, enforce discipline standards, and work with the PLA to ensure peace along the border.

Some question what Beijing is up to. The US military said China is building army and air bases in Tibet, close to the disputed border area. The incident may add more distrust as India tries to discern China’s intentions.

US Backs India While China Claims Violation of Agreements

On November 29, the United States and Indian militaries began an annual 15-day joint training exercise that has existed for 18 years. The military training was held 62 miles from the contested border. It focused on high altitude, extreme cold warfare. After the December 9 LAC confrontation, China accused India of violating the 1993 border agreement by participating in the joint exercise.

On Tuesday, Pentagon Spokesman Brigadier General Pat Ryder said the Department of Defense (DOD) was closely watching the border situation. He stated the incident was a “growing trend” by the PLA. Ryder noted the Chinese were acting proactively toward US allies and partners throughout the Indo-Pacific region.

The general added the US was steadfast in ensuring US partners are secure and that the US fully supported India in its efforts to de-escalate tensions.