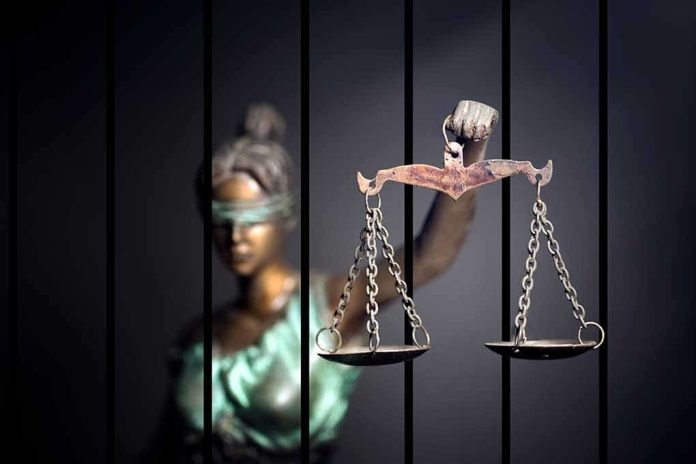 (RightWing.org) – Is America losing its sense of right, wrong, and justice? George Washington once said, “The administration of justice is the firmest pillar of government.” Today, it seems that justice is a subjective term instead of an objective standard. Lady Justice isn’t supposed to distinguish between the lowly and the high. Yet, more and more, it seems that those in positions of power are not held accountable for their actions if they run in the right circles.

There’s little doubt that two justice systems are emerging in America today, and it’s based mainly on politics instead of law. Some might even suggest that the law is becoming a weapon against political opponents instead of alleged criminals. It seems that today, one set of standards exists for former President Donald Trump and his supporters, and another for President Joe Biden.

The Contrast Is Clear

In 2016, the first hint of a problem was when then-Democratic candidate Hillary Clinton got caught using a personal server and email address to transmit classified or otherwise sensitive US information while serving as Secretary of State. On July 5, 2016, Then-FBI Director James Comey made the case that Clinton broke the law, but cleared her of all charges in the next breath. Keep in mind that in 2015, a US Navy sailor took a picture of himself on board a classified submarine and was arrested and charged with numerous crimes. His actions were much less than Clinton’s, yet his consequences were much more severe.

For the next four years, Democrats constantly attacked and harassed the Trump presidency with false accusations. Democrats alleged the former president’s 2016 campaign colluded with Russia to defeat Clinton. The government spent hundreds of millions of dollars investigating the claims. Special Counsel Robert Mueller found no evidence two years later. That didn’t stop the Democrats’ harassment despite testimony that it was a plot against Trump. Nor did it prevent former President Barack Obama and VP Biden from going after former National Security Adviser Michael Flynn on a political witch hunt. In addition, the Democrats constantly accused the former president of abusing his office for financial gain as Trump refused to divest his business interests.

Complicating matters, in January, Democrats impeached Trump a second time, accusing him of inciting a riot on January 6 without any evidence or support that Trump did such a thing. He used rhetoric during a January 6 speech reminiscent of language he used for five years. Similarly, Democrats were also participating in similar rhetoric without any consequences.

President Joe Biden and his son Hunter are in hot water again, but there are crickets from the Democrats and media.

Two crucial issues arose recently that ought to invite investigations, but aren’t because Biden is a Democrat. Newly discovered emails by the New York Post regarding Hunter Biden’s infamous laptop reveal that then-Vice President Biden used personal email to conduct family business communications. In May 2016, emails showed that Biden scheduled unofficial phone calls with Ukrainian President Petro Poroshenko. At the time, Hunter was on the board of the corrupt energy company Burisma Holdings, making over $83,000 per month. The younger Biden didn’t have any energy experience and only one qualification — he was the son of the sitting vice president.

It gets better. A CNN panel admitted the Bidens are corrupt. It happened after discovering that Hunter is meeting with prospective buyers of art to sell his paintings for upwards of $500,000. Hunter’s not an artist, and the panel said there are serious ethics problems related to the discovered activities.

The reason for its value is not because of talent. It’s because Hunter Biden is the son of the President of the United States.

Here’s a significant problem for Democrats and Lady Justice — it’s okay for Joe and Hunter Biden to profit off Joe Biden’s government work while in office. It’s not okay for Donald Trump or his family to do so.

It’s this type of hypocrisy protecting the elite that bothers so many Americans. There are two systems of justice — one for them and one for the rest of America. The politicization of justice is eroding the trust Americans have in the legal system.

As George Washington said, it’s the “administration” of justice that should be a firm pillar of government.

It appears we strayed far from that in the age of partisan justice.