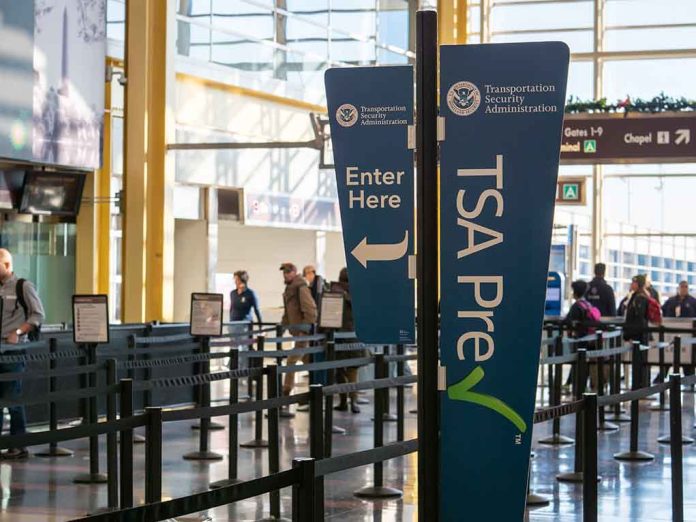 (RightWing.org) – Every year, thousands of Americans forget the rules about carrying firearms into US airports. The TSA regularly finds loaded weapons at security gates, and its agents are used to confiscating handguns. They weren’t prepared for what recently turned up at a Texas airport, though.

On January 16, TSA officers at San Antonio International Airport were scanning checked baggage when a large, olive-green fiberglass case came along the belt. When it went under the scanner, they realized, to their shock, that it contained a large anti-tank weapon.

On examination, the weapon turned out to be a Swedish-made Carl Gustav M4 recoilless rifle. The 15-pound, 37-inch-long M4 is the latest version of a series of weapons that first appeared in 1946, and it’s used by the US military as the M3E1 Multi-Role Anti-Armor Anti-Personnel Weapon System. It can fire a variety of 84mm shells, including anti-tank and high-explosive shells, to a maximum range of 2,200 yards. And, because it vents some of its propellant gas to the rear to balance its recoil, it can be fired from the shoulder.

It isn’t a common sight at airports.

TSA agents soon managed to identify the monster gun’s owner and escorted him to their office for questioning. It turned out that he was flying to Las Vegas for the Shooting and Hunting Outdoor Trade Show; he had intended to exhibit the Carl Gustav, which turned out to have been “de-militarized.” The owner had paperwork proving it had been modified to make it permanently non-functional. A TSA explosives expert was able to confirm this.

Unfortunately for the gun’s proud owner, he hadn’t declared it when he checked his baggage. However, because the weapon was deactivated, he was allowed to rebook on another flight to Vegas — without the gun — and won’t be charged. A relative later collected the anti-tank weapon from the airport.