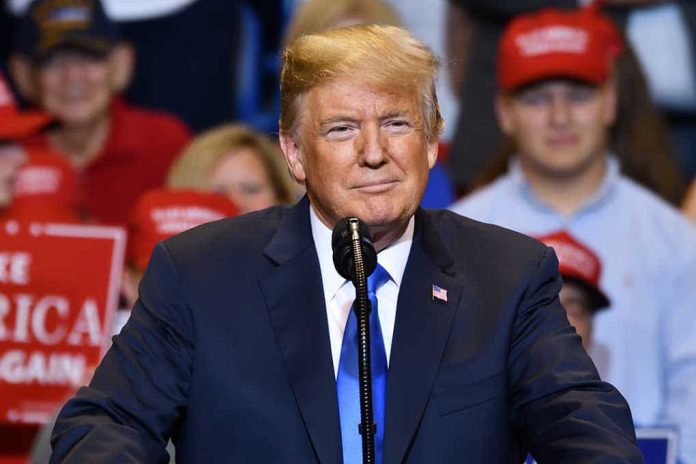 (RightWing.org) – In his first public speech since leaving office, former President Donald Trump spoke at the 2021 CPAC convention on Sunday night, February 28. In his remarks, he rebuked President Joe Biden for rolling back immigration policies that protected Americans and migrants for four years. Between Biden’s campaign rhetoric last fall promising to re-open the border and his actions over the last month, a serious immigration crisis is developing.

Some in his own party are even pleading with the president not to follow through with an open border campaign.

Trump Goes on the Offensive

In a familiar refrain from the 2016 campaign, Trump openly rebuked Biden for his immigration policies. It demonstrates how serious the problem is likely to become. During normal times, former presidents rarely speak out against their successors. However, in the wake of the COVID-19 pandemic and unrelenting attack by Democrats for the last four years against Trump, this is anything but a normal time.

The former president said Biden is personally responsible for creating a “youth migrant crisis” that empowers human traffickers, cartels, and “the most evil people on the planet.”

Instead of protecting America and local communities impacted negatively by illegal immigration, Trump suggested that Biden wasn’t just playing into the hands of bad actors. Instead, Biden is putting “vile coyotes back to work” that the Trump administration stifled.

In recent weeks, Biden began taking criticism for blatant hypocrisy. In February, unaccompanied migrant children arrested at the border increased by more than 50% over January. Approximately 2,200 children per week were crossing the border. The government was projecting 9,000 children to be in custody by the end of February.

In 2014, the Obama/Biden administration initially set up fenced camps to handle large waves of child migrants. During Trump’s presidency, he was accused by Democrats of using the same facilities and policies that the Democratic administration initiated and used, and was scolded for being inhumane and racist. In 2019, Trump terminated the program. However, Biden is reopening two facilities that he criticized.

In addition, Biden stopped the construction of the border wall and is talking with Mexico about halting the Trump-era policies that required migrants to stay in Mexico to apply for asylum.

Two southern border Texas Democrats are pleading with Biden to reverse course. Del Rio Mayor Bruno Lozano appealed to the president in a video to stop the release of immigrants. Rep. Henry Cuellar (D-TX) took it a step further. He warned that the US can’t allow everybody into the country and that districts such as his are the ones that pay the price.

Cuellar warned that illegal immigration could blow up on the administration. He called for Biden to continue Trump’s policies, especially during the pandemic. He warned that human smugglers were already changing their strategies and marketing their services to migrants in central America.

It appears that the 2024 campaign is already underway, and immigration is likely to be a topic of conversation, if not a centerpiece. Trump isn’t going to back down anytime soon, and he is teasing the idea of running in 2024. In the meantime, don’t expect the former president to stop speaking out. He is said to be working on plans to expand his message and reach.