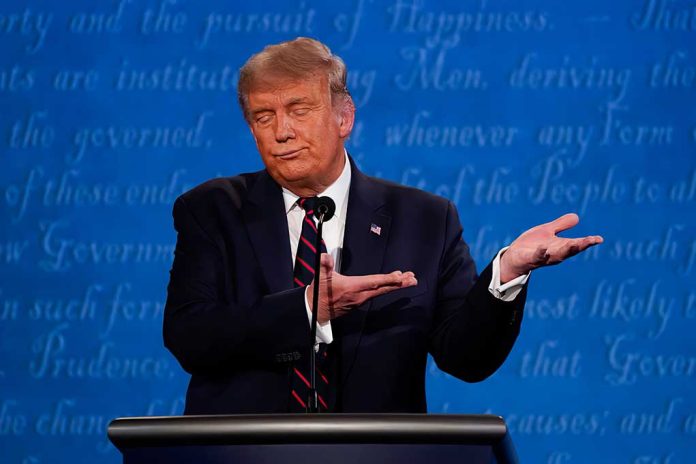 (RightWing.org) – On January 9, CBS Evening News revealed that lawyers working for President Joe Biden found “roughly 10” classified documents while clearing out his old office space at the Washington, DC, Penn Biden Center shortly before the November 2022 midterm elections. According to the commander-in-chief’s special counsel, the attorneys notified the National Archives later that day, and it assumed control of the items the following morning. Donald Trump recently weighed in on the situation.

The former president quickly posted a link to the CBS exposé on his social media platform, Truth Social, and stated his belief that the documents in question “definitely” weren’t declassified. He also asked when the FBI would raid Biden’s “many homes … [or] perhaps even the White House.” Conservative firebrand Sen. Josh Hawley (R-MO) echoed that sentiment on his Twitter account.

Trump: “When is the FBI going to raid the many homes of Joe Biden?” pic.twitter.com/zb8mWVrp6p

The FBI raided Trump’s Mar-a-Lago residence in August and seized scores of classified documents and other items related to a federal search warrant.

Media outlets reported that Attorney General Merrick Garland appointed one of two remaining Trump-era US Attorneys, John Lausch, to investigate how the classified documents ended up in a folder located in a box with other assorted items in Biden’s former office at the Penn Biden Center, a think tank connected to him.

AG Garland has tapped U.S. Attorney for the Northern District of Illinois John R. Lausch Jr., who was nominated by Trump, to oversee the review of Biden‘s classified documents – yes Garland has authorized an investigation of Biden – https://t.co/UYCqKF0S3g

President Biden did admit to the central facts in the case as laid out by the CBS report during a January 10 joint press conference held in the presidential palace in Mexico City, Mexico. However, he claimed he didn’t know what information the classified documents contained, adding that his attorneys had not advised him to ask.

Biden concluded his remarks by telling reporters that the White House was fully cooperating with the review. The president also indicated he would provide additional information once the Justice Department concluded its inquiry into the situation.

According to reports, a second set of documents has now been found by Biden aides. When searching his private residences, lawyers discovered more documents with classified markings. These were held in a storage space inside the garage at Biden’s Wilmington, Delaware, residence. An adjacent room revealed an additional document. These new findings were turned over to the DOJ.

Although there are many questions about if and when the FBI will now conduct a raid on Biden’s residences like they did at Trump’s Mar-a-Lago home, at the time of this publishing, the FBI remains silent on the issue.