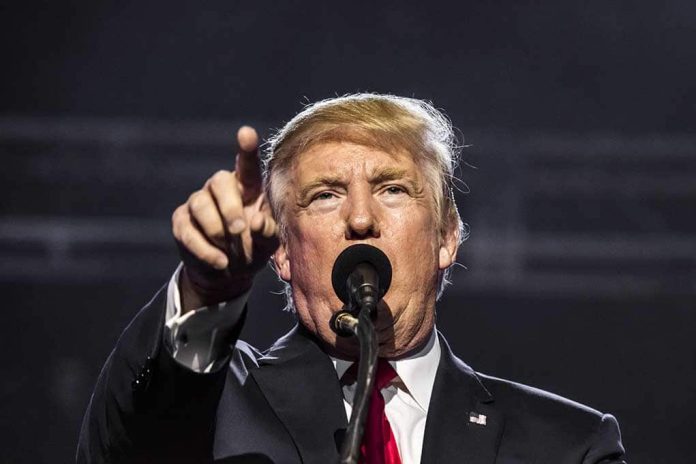 (RightWing.org) – Joe Biden’s reckless actions left Afghanistan in a much worse place than the US found it in 2001. On Monday morning, August 16, videos surfaced of a disastrous scene at Kabul’s international airport as the Taliban overtook the city and the nation within six days. By Monday afternoon, the crisis forced the president to respond as the media pounded him for the way he abandoned the country and those who supported the US for 20 years. Those people are now marked for death by the terrorist group that leads Afghanistan.

The worst of the story isn’t over for Biden. Conservatives have grown accustomed to Biden’s misinformation and disinformation campaigns over the last seven months — but Liberals, not so much. Instead of calling the president out on his lies, the media dismissed the Command-in-Chief’s blatant attempts to cover up his flailing weaknesses. This time, it’s not working, and former President Donald Trump is right there to call him out.

Biden Caught Being His True Self

During Monday’s speech, Biden buckled down in a show of hostility and stubbornness. The president said America should believe him over our lyin’ eyes. He blamed Trump, the Afghanis, and the former Afghan president who pleaded with him not to withdraw just a month ago. Everyone got the blame but himself.

He called for a withdrawal nearly a decade ago as vice president. However, then-President Barack Obama overrode him and escalated the war in Afghanistan. Now, Biden gets to do it his way, and we’re witnessing the consequences.

Now that the liberal media is berating Biden as a failure, the president did what he often does. He misinformed America of the facts surrounding the Trump negotiations with the Taliban that could have served as a foundation for the US withdrawal from Afghanistan. After blaming everyone for what went wrong, Biden said the “buck stops here,” but does it?

It’s typical; the nation’s chief executive tried to pin this disaster on his predecessor. Biden alleges that Trump forced him into the withdrawal and, therefore, the former president should earn the scour of the media and the country. Unfortunately for him, the incompetent sitting president got his facts wrong once again. This time, it’s so evident that the media called out Biden for his incompetency.

So, what’s the truth?

The agreement that Trump struck with the Taliban was a condition-based withdrawal. For the US military to leave, the Taliban and Afghan government would need to strike a peace deal. Second, the Taliban understood that deterrence measures were firm and enforceable. If the Taliban attacked any province during the withdrawal or years after, there would be dire consequences.

Biden did not follow that agreement. Instead, the president did what he wanted to do when he was the vice president: he withdrew precipitously. This decision was Biden being Biden. As former Defense Secretary under Obama stated, Biden’s “been wrong on nearly every major foreign policy and national security issue over the past four decades.”

For his part, Trump is calling Biden out for how he withdrew from Afghanistan. Late Monday night, he said that Biden should “resign in disgrace.” The former president called out Biden on his handling of Afghanistan, COVID, the border, energy policies, and the crippled economy.

For the first time, no one is buying Biden’s story. He’s quickly sitting on an island by himself, and his political capital is all used up.

What we’re witnessing now is a failed presidency in the mold of Jimmy Carter. It’s going to be a long three and a half years.