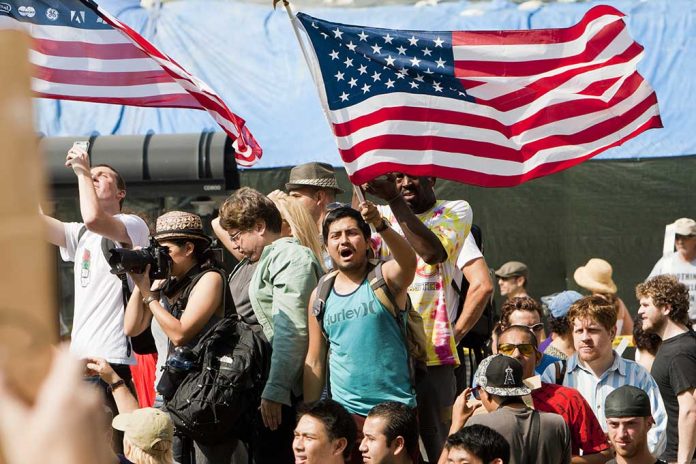 (RightWing.org) – In 2017, a new movement began the process of transforming America’s identity. Few understood how quickly it was happening, but felt something was amiss as a new culture war engulfed the nation in a way not previously seen in modern times.

Several prominent NFL players began kneeling during the national anthem to protest social justice. It was a sport that had typically promoted patriotism in the past but grew to become part of a hostile redefinition of America. Four years later, it’s clear that a new national identity is trying to emerge to replace the old one.

The Transformation of America Is Underway

For nearly a century, sports embodied the American identity. Patriotism, the flag, and the national anthem were central aspects of the games themselves. In 2020, the National Football League began bringing awareness to social justice issues. In and of itself, this shouldn’t be an issue. There’s nothing wrong with using respected platforms to advance worthy causes. However, what if the cause becomes a brazen battlefield for the identity of America?

Not so long ago, the National Football League went out of its way to showcase its patriotism. There were military pregame flyovers, giant flags, and tributes to those who served the nation as members of the military, police, fire, and first responders. Now, it features prominently the black national anthem side-by-side equally with the national anthem. Once again, the league is embracing social justice slogans. The sport is no longer about entertainment and the appreciation of human beings capable of doing remarkable things. It’s about pushing the buttons of the elite cultural warriors intent on changing America’s identity.

The new national identity that’s emerging is defined by anti-racism instead of the pledge of allegiance, BLM over the American Legion, and Juneteenth as a rival to the 4th of July. In education, history is being replaced with a woke revisionism. Activist training of kids is replacing math, science, and reading.

A Country Is Defined by Its Identity

Symbols, associations, holidays, and educational values define a country’s identity. These standards form the nation’s character, and history is a means of shaping its uniqueness. Today, it seems it’s more fashionable to get rid of statues of founding fathers or rename schools in liberal circles than it is to put your hand over your heart.

America is still an experiment in self-government. At some point, citizens may need to decide if the country’s long-held identity is worth preserving and pursuing. Life, liberty, freedom, equality, and justice for “ALL.” These are the causes that inspired generations of people to come to America from around the world.

It’s Up to Us to Decide

Benjamin Franklin was famously quoted as saying that America has a “Republic if we can keep it.” Ronald Reagan warned that freedom is never more than one generation away from extinction. In just four years, the far-Left worked to transform America faster than mold can grow on cheese. They may well be succeeding.

Will America pursue its founding ideals to pursue a “more perfect union” as commissioned in the first words of the Constitution? Or, will it seek victimhood and a destructive ideology and narrative that prefers to denigrate the country and cast it aside as not worth saving?

A nation’s identity defines its priorities. Will America embrace its calling to be the land of the free and the home of the brave? Or, will it succumb to anti-racist narratives that embrace socialism and a new hierarchy that runs counter to liberty and freedom?

Ultimately, it can’t be both.

It’s up to us to decide.