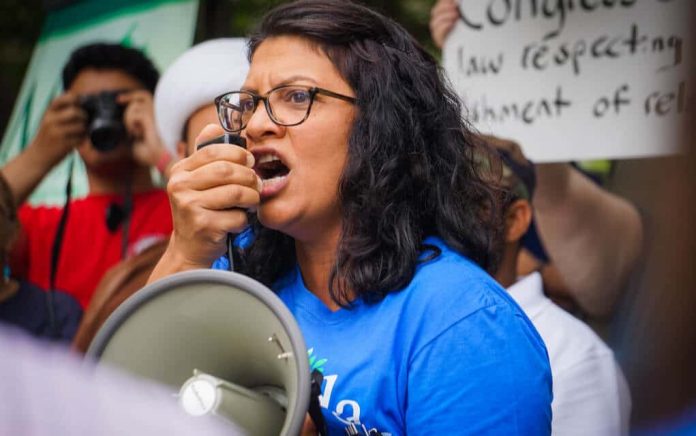 (RightWing.org) – The extreme left of the Democratic Party is at it again. On Sunday, April 11, 20-year-old Daunte Wright was unintentionally killed when 25-year police veteran Kimberly Potter tried to detain the suspect on a warrant. This occurred just miles from where George Floyd died nearly a year ago. Potter accidentally shot Wright instead of tasering him. Overnight on Sunday into Monday morning, violent riots and looting hit Minneapolis again as the trial against Floyd’s accused killer is underway, and emotions are running high.

Not helping the situation any is the “Squad.” Reps. Rashida Tlaib (D-MI), Ilhan Omar (D-MN), and Ayanna Pressley (D-MA) are calling for the permanent dismantling of police in America. Their ideas would likely result in anarchy as crime soars, and innocent people become unnecessary crime victims.

Going way further than just defunding the police, the three extreme leftists allege that America’s policing system is “inherently and intentionally racist.” As a result, Tlaib said policing and incarceration should end altogether as she claimed police shootings were paramount to condoning “government-funded murder.”

Officer Potter was put on administrative leave and will likely face disciplinary or even criminal charges. The incident will also be with Potter emotionally for the rest of her life. While the Squad is trying to make the unfortunate incident about race, nothing that occurred during the interaction between the police officer and the suspect suggests race played a role.

The extreme language coming from the Left can only serve to create deeper emotions and unsettle the community by creating unnecessary divisions between police and the public they serve.

Plus, the results of defunding the police policies are in, and it’s not good for communities. In Minneapolis alone, homicides spiked 49% from July 22, 2020, to March 8, 2021, after police departments were defunded a total of $9.1 million. It led to concerns by some City Council members who insisted that money be given back to the police after they received pressure from residents who want police service.

In the days ahead, the rhetoric could ignite a firestorm of controversy as the House tries to push through major left-leaning legislation with razor-thin margins. After the November election, moderate Democrats warned against using language like “defund the police,” as it hurt several Democrats up for re-election last year.

However, the issue at the moment shouldn’t be political. Instead, let’s hope the Left cools its rhetoric to ensure that communities aren’t destroyed and looted in riots.

That may be wishful thinking.