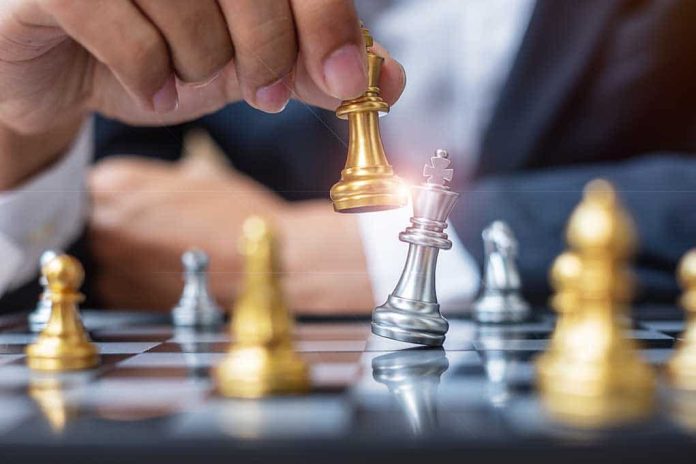 (RightWing.org) – Considering they don’t hold the majority in the House or Senate, the current environment is about the best Republicans could hope for. Between Biden’s incompetency, House Speaker Nancy Pelosi’s (D-CA) demands, and a 50/50 split in the Senate controlled mainly by a moderate Democrat, things are looking good for the GOP. Of course, that could deteriorate at any moment. Unfortunately for the Democrats, they are too busy fighting each other to build any momentum to dampen Republican spirits.

Last week, President Joe Biden announced a bipartisan deal regarding infrastructure. Hours later, he threw a wrench into it with a forced error. Biden succumbed and declared he wouldn’t sign a bill he supported unless a massive “human” infrastructure deal wasn’t on side-by-side with a bipartisan bill on his desk. On Saturday, June 26, he withdrew that statement. By Sunday morning, moderate Democratic Sen. Joe Manchin (D-WV) said he wouldn’t support a $6 trillion proposal from the Left. That’s when socialist Sen. Bernie Sanders (I-VT) threatened to blow the whole thing up.

Sanders Goes to War with Manchin

Honesty, you can’t make this stuff up. It would make a great made-for-TV drama. Except this isn’t TV. It’s real life. Senate Democrats under Senate Budget Committee Chairman Bernie Sanders are pushing for a $6 trillion “human” infrastructure plan for free college, health care reform, child care, elderly care, and the Green New Deal. Senate Republicans are united against the proposal. If Democrats want to pass a bill, they will need to do so using reconciliation. That’s looking harder to do than once thought. If one Democrat refuses to play, the reconciliation proposal is dead.

On Sunday morning, June 27, Sen. Manchin appeared on ABC’s political talk show, “This Week.” His message was, don’t go there. He won’t support that much spending or new debt.

Manchin said he was open to considering a $2 trillion deal that must be paid for, and he won’t budge. It seems Manchin is forcing the Left to curb its appetite. Unfortunately, he’s not saying “no” altogether, but Manchin’s at least holding back some of the Left’s outlandish agenda.

On Sunday afternoon, Sanders shot back at Manchin indirectly on Twitter. Like a petulant child not getting his way, the Vermont Senator said the bipartisan infrastructure bill would not see the light of day unless Democrats pass his reconciliation proposal.

Let me be clear: There will not be a bipartisan infrastructure deal without a reconciliation bill that substantially improves the lives of working families and combats the existential threat of climate change. No reconciliation bill, no deal. We need transformative change NOW.

Could There Be a Stalemate?

It appears there could be a Democratic stalemate. The Left can’t blame the GOP. If they can’t agree and pass it on their own, that’s on them. It’s going to be challenging to get Manchin to move. He’s from a deep red conservative, Trump-loving state. On Sunday morning, Manchin added that he’s been moderate his entire career, and he’s not changing regardless of how much pressure the Left puts on him.

Where does that leave the nation that could use a severe infrastructure update without all the socialist leanings?