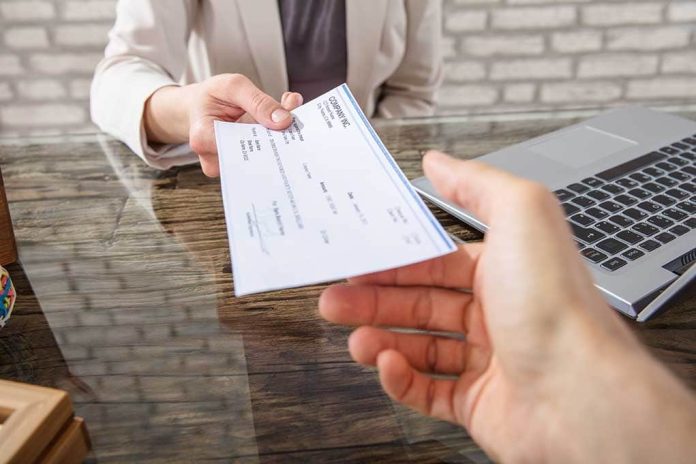 (RightWing.org) – As America comes out of the pandemic, numerous studies from government and private entities show that American’s wages are on the rise. In an ideal world, that would help lower-wage Americans significantly and help minimize hardship. Higher wages are the greatest tool in the fight against poverty. The US Bureau of Labor Statistics recently released a report showing Americans’ average hourly earnings increased from $29.35 in June 2020 to $30.40 in June 2021.

Unfortunately, the wage increase is a big lie, and lower and middle-income Americans are falling further behind. How is it possible that wages are rising, and yet it’s a lie? It’s simple. Several factors are contributing to the steep cost increase in products and services. As prices explode higher than wage increases, the net effect is a wage decrease.

Thanks to exploding prices on just about everything we buy, the actual hourly earnings accounting for inflation dropped 1.7% from June 2020 to 2021. In practical terms, a person earning $50,000 per year lost $850 to inflation over that period. It gets worse. When accounting for the Consumer Price Index figures, your paycheck could lose an annual rate of 6% or more for 2021. That $850 loss may not look so bad when all is said and done.

What’s Behind the Wage Decrease?

As the country’s economy continues to emerge from the shadows of the pandemic, a new threat against the lower and middle classes develops. It was an immediate and predictable consequence of state government shutdowns of the economy. To meet the lower demand, manufacturers scaled back the production of goods throughout much of 2020.

At the same time, the government put trillions of dollars into the economy that consumers could spend; some of it went to bank accounts in the form of stimulus payments. Once the government gave the go-ahead for people to wander away from their homes, the spending spree began almost immediately.

One would think that’s a good thing.

It wasn’t good at all. Manufacturers and supply chains can’t keep up with the explosive demand. There aren’t enough workers to fill the jobs that make and deliver the products to stores. Still, people want to spend the money they got for breathing. In a free market, when demand outstrips supply, prices go up.

Unfortunately, another sinister culprit is contributing to the decrease in your purchasing power.

That’s Not the Whole Story

Hold on tight. There’s more. It’s not just a supply and demand issue driving the problem. It’s also a government policy issue. The Biden administration enjoys some culpability in the wage decrease crises thanks to inflation. The administration and Democrats in Congress are pressing forward with massive spending initiatives. The Federal Reserve continues to pump trillions of dollars into the economy when it needs to slow down or stop.

The root cause of inflation is out-of-control government lockdowns, spending, and debt. By the laws of economics, when the government behaves this way, inflation will always follow. Inflation is good for the government. It’s cheap money to service the national debt. It’s terrible for you. It causes the prices to go up on everything you buy and reduces discretionary income, assuming there was any to give away.

It’s also bad for you as politicians try to solve your economic woes by giving your bank account more money through increasing government spending initiatives in various forms. Take, for instance, the new child tax credit payments many Americans are starting to get each month.

If the administration and Congress refuse to chart a different course, Biden will make his own history, and we will all be stuck living with the consequences.

The fate of the American worker and America’s future lies with the administration. Let’s hope they make better decisions soon.