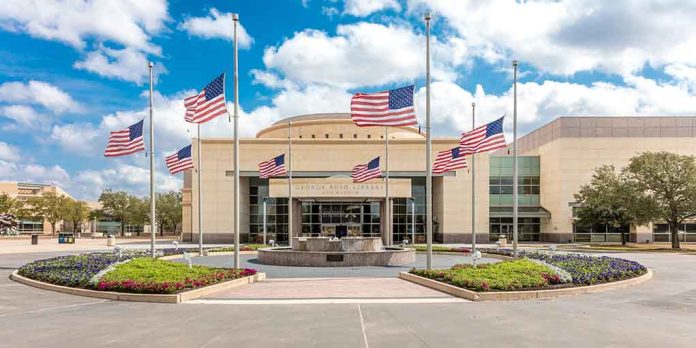 (RightWing.org) – Over the last four generations, the Bush legacy produced a World War II hero, a leader of the CIA, a vice president, two governors, and two presidents. Is it possible that a younger Bush could add to that extraordinary legacy? George P. Bush has served two terms as the commissioner of the Texas General Land Office.

George P. Bush is the last elected member of his family’s political dynasty. Before Donald Trump arrived on the GOP scene in 2016, the family was considered GOP aristocracy. Now, Trump has secured the reigns. On Tuesday, May 24, the former president may have put a permanent dagger in the heart of the establishment wing of the Republican Party led by the Bushes for decades.

Paxton defeated George P. Bush in the Republican primary runoff on May 23, with 61.1% of the vote compared to Bush’s 32.9%. The Associated Press called the election for Paxton with only 51% of the state’s precincts reporting.

During the campaign, George P. Bush argued that Paxton was too controversial and mired in scandal. He claimed that Paxton didn’t have any integrity and didn’t belong in the state AG’s office.

Recently, reporters asked him if his last name was a help or hindrance to his campaign chances. He said it helped, but it appears voters disagreed based on Tuesday’s election.

Paxton Said He Got in the Way of the Bush Dynasty

In March, Paxton defeated George P. Bush by 20 points in the state primary election but didn’t meet a 50% threshold to avoid a runoff. In an interview with Fox News before the runoff, Paxton appeared confident that he would win. He stated that he was in the way of the Bush dynasty’s plan to ensure that George P. Bush could use the AG’s office to work his way up to governor or possibly president one day.

Over the last year, Paxton has been a national leader championing the cause to overturn many of President Joe Biden’s policies through legal means. He’s been at the center of the legal challenges over illegal immigration and protecting children from what he called child abuse by parents for signing off on transgender medical procedures for minors.

So, what’s next for George P. Bush? For the first time in 40 years, a Bush won’t serve in an elected office. Will he run for office again in the future? Is the Bush political dynasty dead?

In politics, nothing is impossible, and only time will answer the question.