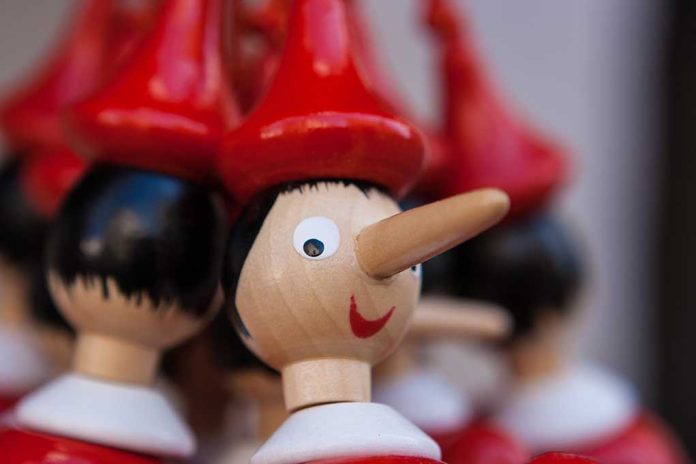 (RightWing.org) – There were several changes in Washington DC on January 20, 2021, most notably, newly elected President Joe Biden and Vice President Kamala Harris being sworn in and assuming their offices. What had not changed was the insistence of the Liberals to put their Agenda before the truth. Here are a few of the whoppers we were forced to endure.

President Biden reneged on a deal made between former President Donald Trump and the Taliban terrorists. This act triggered a military offensive on the part of the insurgent forces, which saw them quickly overrun large swaths of the country, quickly closing in on the capital city of Kabul. Faced with the enemy virtually knocking on the door to the Kandahar air base, President Biden began a rushed evacuation.

On August 20, Biden did promise to get all Americans and all the Afghan internationals who assisted the US in the war effort out of the country. But when the last airplane went wheels up from the airport, hundreds of American citizens and an unknown number of the helpers and their families were left stranded in a country now controlled by unfriendly forces.

While the president and his press secretary, Jen Psaki, tried to deny the promise of 100% evacuation was ever made, an Associated Press (AP) fact check said, “[f]or the record, Biden vowed that he would get 100% of Americans out before withdrawing forces.”

2. The Insurrection That Wasn’t

On January 6, then-Vice President Mike Pence and a joint session of Congress gathered in the Capitol building for the process of certifying the result of the November 2020 presidential election. The demonstrations in front of the building turned into a riot, and the violence spilled inside.

Leftist politicians and media sources immediately began calling it an “insurrection” by supporters of President Trump. That continues with the National Public Radio (NPR) webpage having a running feature titled “Capitol Insurrection Updates” with a new story added on December 27.

The issue with the term is that prosecutors have not charged any of 700+ people arrested with anything closely related to that level of crime. In fact, according to the Washington Post, prosecutors have had to go to court to defend the validity of obstruction of justice charges, which are the sole felonies.

3. Got the VAX? Drop the Masks

When various vaccines for the coronavirus developed under President Trump’s Operation Warp Speed received their Emergency Use Authorizations (EUA) from the FDA, people were anxious to get the shot. And why wouldn’t they be? On May 13, President Biden addressed the country and told everyone that “if you are fully vaccinated, you no longer need to wear a mask.”

However, months later, on December 27, Dr. Anthony Fauci, the number one advisor to the White House on all things pandemic, said to forget the idea of attending any New Year’s Eve parties. State and local governments have also advised avoiding large gatherings during the holidays and to mask up even at small ones if there will be people outside your everyday household.

To paraphrase an old adage, how can you tell when a Liberal is lying? His lips are moving.