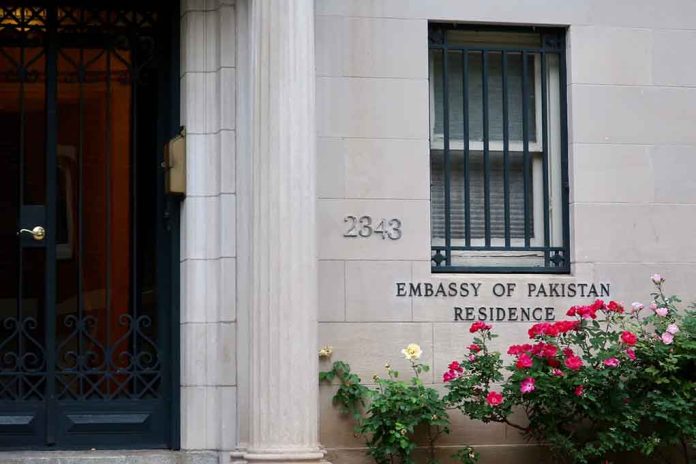 (RightWing.org) – Pakistan, a troubled state that’s officially a US ally but seems to be unsure whose side it’s on in the post-9/11 world, appointed a new ambassador to the US – and they’ve made a worrying choice.

The government of Pakistan announced Masood Khan will be the country’s new ambassador to Washington. At first glance, Khan seems like a good choice. He’s a former Pakistan foreign ministry official, has served as ambassador to the UN and China and was president of the disputed territory of Azad Kashmir for the last five years. He’s an experienced politician and diplomat; surely just the sort of person we should welcome as an ambassador, right?

Wrong. Khan is no moderate; he’s been an outspoken supporter of violent jihad for years. As the Azad Kashmir president, he openly supported notorious female terrorist Aafia Siddiqui, who’s known as “Lady al-Qaeda” and is currently serving 86 years in US federal prison for attempting to murder an American soldier. As recently as this July, he praised Burhan Wani, a Hizb-ul Mujahideen terrorist killed by the Indian Army in 2016. Khan called Wani “a role model” and criticized US sanctions against the Hizb-ul Mujahideen.

Pakistan’s new ambassador is a longtime backer of jihadi groups | Opinion by @samwestrophttps://t.co/bkPfR4J82o

Pakistan isn’t a country we can just ignore. It’s a nuclear-armed state, it’s sheltered enemies of the US and it has tense, sometimes violent, relations with India, an increasingly important US partner. It would be nice to have a Pakistani government committed to peace and diplomacy – not one that sends us a terrorist sympathizer as its official representative.