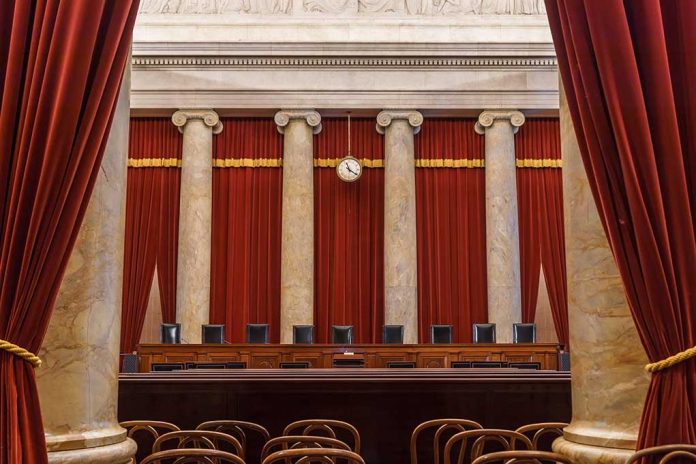 (RightWing.org) – Much of the country has returned to a sense of normalcy after the COVID-19 pandemic. On Sunday, “60 Minutes” aired a clip of President Joe Biden saying the pandemic is over. Still, some municipalities continue to require public employees to get COVID-19 vaccines as a condition of employment. On Tuesday, September 21, New York City Mayor Eric Adams ended the requirement on all entities other than city workers.

In August, Supreme Court (SCOTUS) Justice Sonya Sotomayor denied a request from NYPD Detective Anthony Marciano to consider his challenge to the municipality’s vaccine mandate regarding civil employees. Recently, the detective resubmitted his appeal to a more friendly justice, and now the high court is set to consider if it will entertain the legal challenge on October 7.

On Tuesday, the SCOTUS’ press office confirmed Justice Clarence Thomas agreed to put the case before his colleagues to consider whether or not they would accept it. Make Americans Free Again attorney Patricia Finn, who represents Marciano, said she decided to appeal to Thomas due to his past opinions being in line with her views.

In 2021, the NYPD detective sued the city for requiring municipal workers to vaccinate against COVID-19. Unlike in other legal cases, he didn’t ask for an exemption based on religious beliefs or medical reasons. Marciano argued he built immunity from the disease due to his exposure to it from serving the public daily during the pandemic. As a result, he said he should be able to make personal decisions about his health.

By the end of August, New York City terminated 1,761 people for refusing to comply with the mayor’s vaccine mandate. Former Mayor Bill de Blasio initially ordered the requirement in November, and Adams has kept it in place. On Tuesday, reporters asked the mayor how he could legally justify ending the mandate for the private sector, but not the public sector. He responded, “We roll things out slowly,” and stated ending the public worker mandate wasn’t a consideration right now.

Can a Government Employer Force Employees to Vaccinate?

Finn told POLITICO the case was simple. She said neither federal nor state law allow for vaccine mandates, and recipients must give informed consent. Marciano’s attorney argued because he refused to provide that consent, the NYC violated his due process rights.

The attorney added she believed the SCOTUS was clamoring for a case like this one, but needed someone to approach them with a straightforward and clear argument.

Harry Nespoli, a co-chair of the Municipal Labor Committee which represents some of the largest public unions in the city, said leaders treated their workers as if they were disposable after all they did during the pandemic. Teamsters Local 237 Head Greg Floyd noted his union is waiting to see if politicians apply the same standards to the public sector as they do to private companies. If not, he stated unions would demand it and pursue legal recourse if necessary.

If the SCOTUS takes the case and ultimately rules in Marciano’s favor, the question is: Will the ruling only impact New York City in a tailored decision, or will the justices make it a more wide-sweeping, precedent-setting opinion?