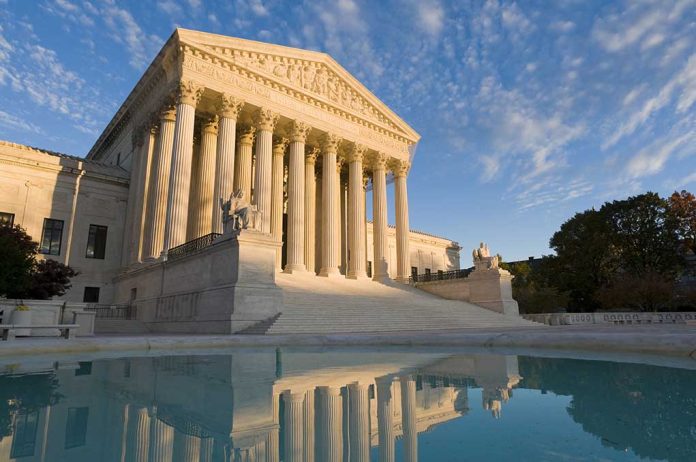 (RightWing.org) – In late 2020 and the early days of the Biden administration, Joe Biden said he didn’t believe a COVID vaccine mandate was necessary and wasn’t Constitutional. On September 9, 2021, President Biden ordered the Occupational Safety and Health Administration (OSHA) to do something never before done in America.

The president announced a plan he hoped would get around the US Constitution. Biden mandated the small and overtaxed federal agency to design a workplace COVID-19 vaccine mandate for all businesses with 100 employers or more under the guise of worker protection. The Secretary ordered 84 million Americans to obtain a vaccine or undergo weekly testing at their own expense for the privilege of making a living. On Thursday, January 14, the US Supreme Court (SCOTUS) stepped in and overturned Biden’s workplace vaccine mandate.

When the framers ratified the Constitution in 1787, they ensured that no one person or group would be able to rule over the new country’s citizens. Separation of powers is integral to the US system of government. The legislative branch writes laws, the executive branch enforces them, and the judicial branch ensures adherence to the Constitution, and resolves disputes between the two other co-equal branches of government and the states.

When Biden announced the vaccine mandate, he immediately thrust small businesses reeling from crushing labor problems into chaos. If Amazon loses 20% of its workforce, that isn’t a problem. If a company with 125 employees loses 25 workers, it can be devastating. As soon as OSHA enacted the policy under Emergency Use Authorization (EUA) that allowed it to bypass normal processes for implementing a new regulation, the lawsuits started flying.

On Thursday, the SCOTUS’ 6-3 conservative majority ruled that Congress created OSHA for a specific purpose. They added the agency only has the power given to it by Congress under the weight of the law. As such, the court said the mandate was a “significant encroachment into the lives—and health—of a vast number of employees.” The nation’s highest court said it expects Congress to speak clearly when authorizing an agency to exercise extreme powers of incredible economic and political significance.

Perhaps the most critical part of the ruling was when the justices declared COVID-19 is not an occupational hazard. Instead, it’s a universal risk whenever people gather together and is no different from day-to-day dangers that people face from crime, pollution, or any number of diseases.

In essence, the SCOTUS said the government could not proactively protect everyone from bad things happening to them through forced coercion, manipulation, and mandates. Therefore, expanding OSHA’s authority beyond what Congress authorized is a clear violation of the separation of powers, thus is unconstitutional.

Unsurprisingly, the Left Erupts in Fury

After the Supreme Court released its ruling, the Left immediately went to work. They reacted with anger, rhetorical attacks on the GOP, and calls to pack the court. Some stated the Republican confirmed majority on the court wants the pandemic to worsen to help Republicans win in November. Others called the conservative majority right-wing extremists.

It’s pure folly. The Left’s rhetoric and behavior show they lack understanding of history, the Constitution, and common sense. What the SCOTUS did was a justice to the rule of law. Yet, Progressives and Socialists confuse the government, law, and science for their own purposes.

The bottom line is Biden did something that Congress did not authorize him to do. If Congress wanted OSHA to mandate a workplace vaccination program, it had numerous opportunities in 2020 and 2021 to do so. Lawmakers didn’t propose one, and for a good reason. There weren’t enough votes to pass a vaccine mandate into law. Of course, that hasn’t stopped them from trying to overreach on the failed Build Back Better semi-socialist legislation or supposed voter rights reforms.

So, Liberals may cry about the Constitution and the law. That doesn’t change the reality that a pandemic doesn’t nullify America’s founding legal document. The SCOTUS has reminded the Left of this since November 2020. Yet, they’re either incapable of understanding the Constitution, or worse still, they ignore it when it doesn’t meet their agenda.

It won’t be the last time the Supreme Court puts on a civics clinic so long as Biden continues to recklessly trample on the Constitution.

While unpleasant for many Americans, perhaps the Democrats’ attempt to subvert the law will spur more Americans to discover civics and how our system of government is supposed to work.

There’s always a silver lining, even in victory.