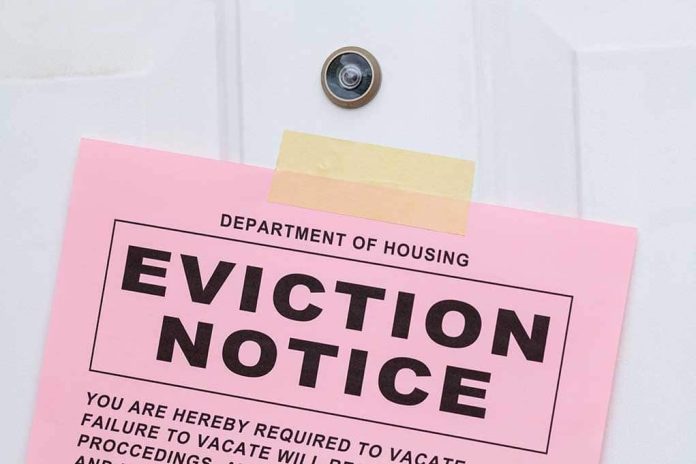 (RightWing.org) – The Centers for Disease Control (CDC) made an unprecedented decision as COVID-19 swept across America in the spring of 2020. It ordered all evictions and mortgage foreclosures to cease immediately. As unemployment surged and the virus ran rampant, governors shut down businesses and locked people in their homes. Unemployment spiked into the tens of millions as people lost their jobs at no fault of their own.

Stuck in the middle were entrepreneurs who took a risk and bet on themselves by buying properties and turning them into rentals. The CDC order put them in a severe bind. Legally, landlords were still responsible for taking care of their home rental units despite receiving no income from renters unable to pay due to the government’s actions. Last summer, they sued the CDC. On Tuesday, June 30, the US Supreme Court declined to lift the eviction moratorium.

The CDC maintains that it put the order in place to keep people in their homes to prevent the spread of COVID-19. The CDC said nearly 6.4 million renters are behind on their rent in the latest order, which extended the eviction moratorium to July 31.

In February, US District Judge John Barker ruled that the CDC violated the US Constitution when it executed the eviction moratorium. Small landlords were crushed when they lost income. Some are still not getting paid by renters over a year later. Despite the benefit to the renters, there was no relief for landlords. They were required to pay their mortgages, property insurance, and keep up with maintenance.

Judge Barker ruled that the US government cannot regulate commerce across the states and violated the Commerce Clause in the US Constitution. However, he did not issue an injunction against the CDC’s order. Instead, he wrote that he expected the federal government to withdraw the eviction moratorium.

In refusing to hear the case, the Supreme Court also refused to lift Barker’s hold in a 5-4 vote. Therefore, the high court did not rule on the merits of the case. The court said that, because the moratorium will be lifted on July 31, there was no need to hear the case. Chief Justice John Roberts and Justice Brett Kavanaugh sided with the liberal wing of the court.

Writing for the court in a one-page ruling, Justice Kavanaugh said he agreed with Judge Barker’s ruling that the eviction moratorium was illegal and that the CDC exceeded its authority.

Due to the alarming violation of the US Constitution, it would seem appropriate for the court to take the case and rule on its merit. The high court could put to bed the issue once and for all and prohibit the government from taking any similar action in the future. Until it does, the executive branch can operate with impunity during a crisis.

Unfortunately, the Supreme Court didn’t take the opportunity to settle the matter and set precedence.