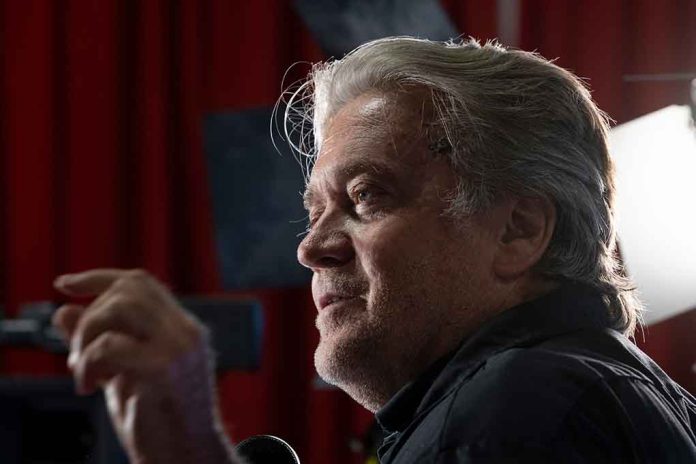 (RightWing.org) – Over the last two years, the economy has been hammered. Upwards of 20 million Americans filed for unemployment benefits in May 2020. As things started to rebound in the spring of 2021, those plush with money to spend did so in a flurry. What they have experienced since is rising costs month-over-month.

On Thursday, January 12, the Labor Department (DOL) released the latest inflation numbers, and it showed prices continued to be stubbornly high for December. Recently, former White House Chief Strategist Steven Bannon warned things were about to get a lot worse. He predicted a “dark winter” was on the horizon and pinned the blame on President Joe Biden and his policies.

The former adviser to Donald Trump issued the dire alert of impending economic problems during a segment of his War Room Podcast. Bannon said Americans should take the prediction seriously and prepare themselves. He noted that in October 2021, The Economist ran a series called “The Shortage Economy” and said the country needed to get ready for the “bleakest, darkest Christmas in memory.”

The conservative podcaster added the economic situation was beyond stagflation and said it was a consequence of the 2020 election. Bannon noted the president’s monetary and fiscal stimulus policy was the “most reckless thing in American history.” He stated workers would be the ones to pay the price and that the media wouldn’t tell the public the facts.

On Thursday, the government reported that inflation continues to be stubbornly high. Still, it did show that 2022 ended with a slight retreat in consumer prices. The Consumer Price Index (CPI) rose 6.5% from a year ago when expenses surged at the end of 2021. Still, it fell 0.1% for the month and was the largest monthly decline since 2020.

The DOL noted the slight drop in inflation was largely due to a decline in gas prices. Consumers saw costs drop 9.4% at the pump in Decembet — down 1.5% from December 2021. It’s not all good news, though; food prices rose 0.3%, and the cost of shelter rose 0.8% for the month, which is 7.5% higher than at the same time last year.

Nonetheless, high costs have placed a substantial burden on many families as the cost of living continues to rise. The minimal good news could be short-lived, too. While gas prices dropped in December, they went up the first two weeks in January. It’s notable this is the time of year when gas demand is at its lowest. Now, China is reopening its economy, which could add to global demand, causing prices to rise even further.

America’s not out of the woods yet.