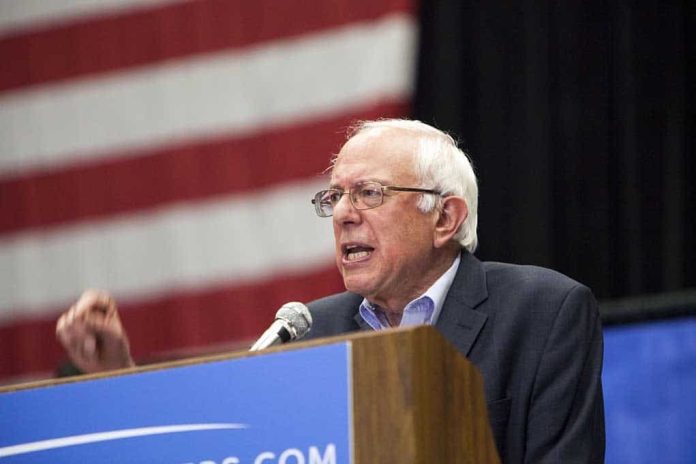 (RightWing.org) – It wasn’t long ago that the word “socialist” was taboo in America. In 2016, admitted socialist Sen. Bernie Sanders (I-VT) changed all that. For many, especially on the right, it seemed to come out of nowhere. It didn’t; it was a long-time in the making.

Democrats know how to play the long game. Sure, they lose in the short term, but their policies endure long after voters boot Democrats from the majority. Consider Obamacare. It’s not dead despite Republican promises for nearly a decade that they would get rid of it. They failed to do so. That’s why what’s happening now is vital to the future of the United States. What will this country become? The Senate Budget Committee chairman will lead Congress and the United States to disastrous consequences if Sanders has his way.

Sanders Is Neither a Compromiser Nor a Uniter

In the summer, Sanders and his proteges in the House, aka the Squad, tried pushing Democrats to accept a $6 trillion partisan reconciliation package. If enacted, it would fully transform the US economy once and for all into a full-blown entitlement society run by the government.

It wouldn’t just be a complete cradle to the grave hijacking of America that strips virtually everyone of any wealth or opportunity for a better life. The government would decide what is and is not best for you in almost all areas of your life. It would take power from parents and give it to the bureaucracy. It would decide who works where and for how much. It would also indirectly dictate what you buy and for how much. It would be a disaster. Socialists under the leadership of Bernie Sanders would destroy everything good about America under the guise that it’s somehow evil.

In 2016, Hillary Clinton saw the writing on the wall. After the 2016 election, she wrote a book denouncing Sanders and his entire political philosophy. At that same time, then-House Minority Leader Nancy Pelosi (D-CA) and then-Senate Minority Leader Chuck Schumer (D-NY) said they were deeply concerned about Sanders’ ability to move the party to the left, which was impractical and divisive.

Now, Pelosi and Schumer not only embrace Sanders — they champion his left-wing causes. In just four years, he went from being called divisive by party leaders to being put in charge of the Senate Budget Committee to find the path forward to fund his agenda.

That’s how out-of-control the Democratic Party is today. The party found a way to move millions of moderate Democrats into the socialist camp just a few years removed from Hillary Clinton. Still, it’s a 50/50 divided Congress, and the Left does not have a mandate. That isn’t stopping Sanders and his followers from acting as if it does.

On Friday, October 9, Sanders said he would not talk with moderate Sens. Joe Manchin (D-WV) and Kyrsten Sinema (D-AZ). Instead, he bashed them for holding up his agenda. On the one hand, Sanders wants to know what the two would cut. On the other hand, he said he will not negotiate down from his $3.5 trillion reckless proposal. The socialist said he compromised enough when he came down from $6 trillion.

The Socialist Agenda Is Not Popular

Every day, Democrats try to persuade America that America embraces their crazy $3.5 trillion bill. In early September, Axios published a bipartisan No Labels survey showing that 60% of Americans agreed with Manchin to put a “strategic pause” on the legislation. Broken down demographically, it’s not good news for the Left as Americans continue to learn more details of the left-wing bill and how the Democrats will pay for it.

Sanders claims it’s two people holding up his plan. In reality, it’s 52 people. Sanders acts as if the GOP doesn’t even exist. He probably wishes that were true. Regardless, it’s not just Manchin and Sinema. The country shouldn’t be so easily bamboozled by Sanders’s rhetoric. Yet, here we are.

The question moving forward is, are the majority of Democrats with Manchin or Sanders? There isn’t much middle ground. Manchin is a traditional Democrat. Most times, he will vote with the party and give them what they want. This time, he’s holding the line after recently saying he’s not a Liberal and doesn’t believe in Bernie’s socialist agenda.

It’s going to be interesting to see if one of them blinks and strikes a deal or not. Right now, Sanders says he won’t. If not, then the two-track infrastructure deal could be dead. Manchin had it right recently. He said if the Left doesn’t want to negotiate, then they need to elect more Leftists.

As desperation sets in on the Left, keep an eye on Manchin and Sinema as the rhetoric and inappropriate behavior against them escalates. It’s the first time the activists have gone against their own. Will it change the view of civility and decorum for moderate Amerians? Will they fight hard to elect more Moderates or Conservatives who will protect America?