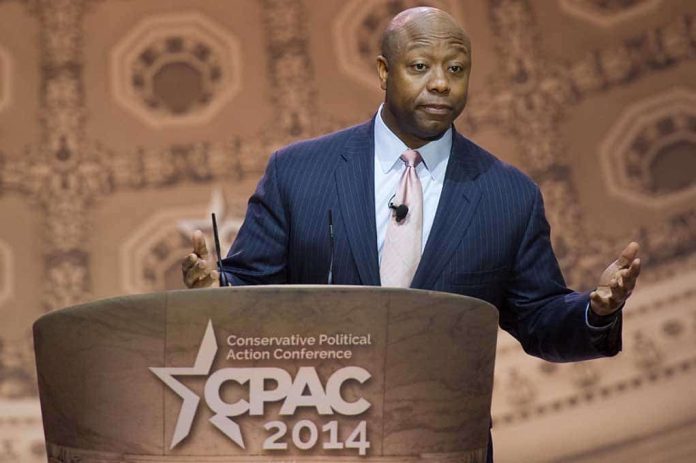 (RightWing.org) – No one ever said politics was fair. That’s especially true if you’re a Black conservative Republican who’s an influential elected official. On Wednesday, April 28, US Senator Tim Scott (R-SC) was chosen to offer the rebuttal to President Joe Biden’s speech before Congress. On issue after issue, Scott demonstrated why he’s a rising star in the GOP and a direct threat to the Left and the Democrats’ hold on the Black community.

Biden tried to paint a picture in his speech that the government is here to solve all that ails America, including the problems it creates. However, Sen. Scott upstaged Biden’s speech by exposing the destructiveness of the Left’s policies and declaring that America is not a racist country despite claims to the contrary by Democrats. For that, the hypocrisy of the Left exploded on social media as the worst kinds of racism raised its head against the black conservative senator.

America Is Not Racist

In Scott’s remarks, he hit home strong on race as America is embroiled in controversy over police relations in some communities. He called out Democrats for their racial identity politics and suggested that it was the Liberals trying to leverage race to their political advantage.

“It’s backward to fight discrimination with discrimination,” Scott exclaimed as he made the case that the country needs to find common ground on the issue of race. Because he’s conservative, Liberals and the Left often call him an Uncle Tom or the “N” word. Scott took the opportunity to call them out for their hypocrisy. It seems it’s okay to use those words so long as you’re woke and supporting liberal causes. That doesn’t sit well with the conservative South Carolina Senator.

It didn’t take long for Twitter to allow racism to take over its platform. Of course, it is… it’s not really racism if it’s coming from the Left towards the Right. “Uncle Tom” trended after the speech, and some even changed the discriminatory slang term to “Uncle Tim.”

Making matters worse, a White newspaper journalist at the Washington Post wrote an article suggesting Scott isn’t really black because an ancestor owned land after the Civil War. The paper alleged that Scott is nothing more than a token Black person the GOP trots out when needed.

Where is the outrage and shame on the Left? Can you imagine if Fox News or the National Review wrote something like that about number three House Democrat Rep. James Clyburn (D-SC)?

In the end, all the attacks really show is that the Left is deeply alarmed and afraid of Sen. Scott. They should be. He knows how to debate and expose the Left. He’s experienced racism. Yet, he believes in America and its Constitutional charge to become a “more perfect union.”

America needs Tim Scott’s voice. The country needs the voices of others such as his to help unify the country. On Wednesday night, Scott upstaged Biden and did something Biden couldn’t do — tell the truth and inspire America.