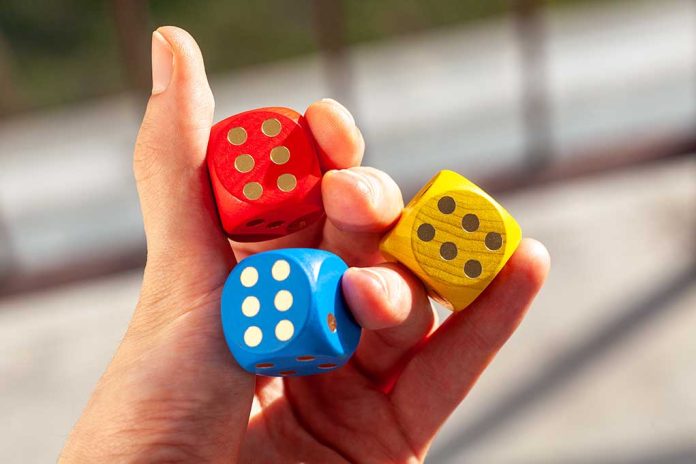 (RightWing.org) – Political games are nothing new in Washington, DC. Both sides of the political aisle try to use legislation to create leverage, paint themselves as champions for their constituents, and make political opponents look bad. Over the summer, Republicans decided they would not cooperate with Democrats to raise the debt ceiling. They argued if the Left wanted to enact trillions of dollars in far-left social policies and climate change proposals through the partisan reconciliation process, Democrats would need to raise the debt ceiling to pay for their future spending without them.

Every few years or so, Congress is obligated to increase the debt ceiling to ensure the US government can meet its financial obligations. The debt limit is the legal limit on the amount of money the Treasury department can pay those it owes money to in various forms of debt like Treasury bonds. After Senate Minority Leader Mitch McConnell (R-KY) offered Democrats a lifeline in October, it appears he’s doing it again. This time, it comes with a political calculation that could backfire.

In November, Treasury Secretary Janet Yellen warned that the US would reach the current debt limit on December 15. If Congress doesn’t increase the debt limit, the US government could default on its debt sometime between December 21 and January 28. Economists widely agree that if the US defaults, it could have significant consequences for both the US and global economy.

In recent weeks, McConnell began secretly conversing with Senate Majority Leader Chuck Schumer (D-NY). Many in Republican circles appeared uneasy about the backroom negotiations as McConnell told them not to worry about it. At the same time, the minority leader signaled to the media that the US would not default on its debt.

McConnell’s position appears to be changing from Democrats can own the debt ceiling increase by including it in reconciliation to the GOP will throw them another lifeline.

On Tuesday, December 7, McConnell informed Republican senators that he and Schumer agreed to a plan that would allow Democrats to increase the debt ceiling on a simple majority without the GOP. Democrats would include a specific dollar amount the Treasury could borrow as part of the agreement.

The House of Representatives is preparing legislation to suspend the Senate filibuster rules for a debt ceiling increase. It would set the debt limit at a specific amount instead of a specific date. Ideally, the amount would be high enough to get the nation through the 2022 midterm elections.

Will the Tactic Benefit the GOP?

Republicans hope to use the measure to harm Democrats politically. The idea is it won’t be the GOP voting to increase the national debt. It’s the Democrats. However, it’s a technical distinction.

In this case, what’s the difference between enabling and doing it?

The question is, will the political campaign strategy work?

Will most voters even care?

It depends. If the GOP can tie the vote to the radical left-wing semi-socialist spending. It’s risky, yet many Republicans believe McConnell’s solution is the best of all evils. The consequences of not raising the debt limit are too great. Republicans can point to a specific piece of legislation they voted against, and Democrats voted to raise the debt ceiling by an enormous amount of money, proving they are the tax and spend party.

Some say politics is a contact sport. Make no mistake, the GOP is playing a game with the debt ceiling. Let’s hope they win without anyone on their team getting seriously injured.