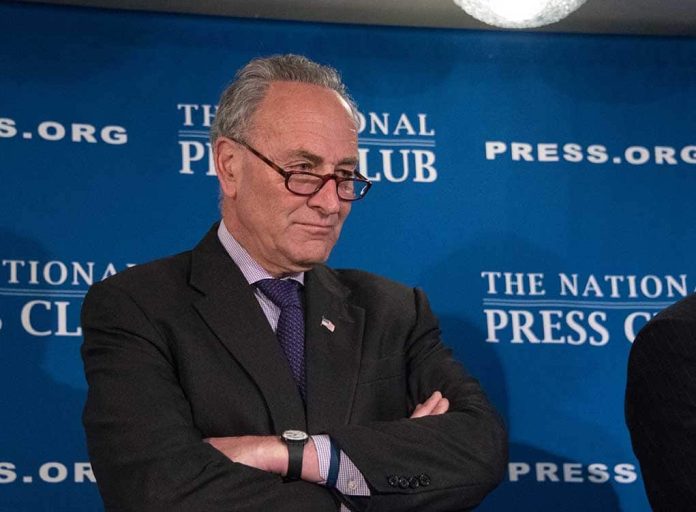 (RightWing.org) – Inevitably, there’s always one kid on the playground who is a sore loser. We’ve all been there. When one kid is losing, he or she changes the rules to their favor. Adults sometimes are no different, especially when you’re trying to bribe your way for votes and unbridled power.

Once again, Senate Majority Leader Chuck Schumer (D-NY) is trying to twist the rules without breaking them. It’s already too late for that as the Democrats pursue a burn-it-to-the-ground high-stakes game of reconciliation. Just last month, Schumer got caught working behind the scenes to create a backup plan using reconciliation to pass President Joe Biden’s infrastructure bill. The GOP isn’t buying the Left-wing proposals that could radically transform America. Now, Schumer is threatening to use the budget gimmick tool in a way it wasn’t attended, once again, to legalize 5.2 million illegal immigrants.

If you can’t join ’em, beat ’em at all costs if you can. That line of thinking is destructive to bipartisanship and goodwill. Unfortunately, Democrats no longer care about any of that as they recklessly pursue the most far-Left agenda in US history. Immigration activists believe now is the time to act with a Democratic House, Senate, and White House.

So, Schumer isn’t wasting time. He recently told the Congressional Hispanic Caucus that he’s looking into attaching immigration laws that would legalize millions of immigrants to the infrastructure bill proposal. Then, he’ll try to use reconciliation to get around the 60 votes needed in the Senate and pass a bill on a purely partisan basis.

Democrats Are Destroying the Legislative Process

In April, House Speaker Nancy Pelosi (D-CA) endorsed using reconciliation to pass legislation on a simple majority. However, this is not how reconciliation was intended to be used. The measure is supposed to be used only once per year to ensure that Congress passes a federal budget. However, it’s become a darling tool of the Left to pass their agenda since Biden was sworn in on January 20.

Last month, the Senate parliamentarian told Schumer that previous reconciliation bills could be re-opened and revised. That opened the door to the possibility that Democrats could pass far-Left legislation on a partisan basis.

However, there are still strict rules about what is considered a budget item and what is not. Democrats will try to argue there is a budgetary cost to legalizing millions of immigrants. Republicans will argue that legalization is not a budget issue, but a legal citizenship/resident status issue and doesn’t qualify.

In the end, there are only two ways to stop Schumer. The first is the Senate parliamentarian could be the final arbiter. The parliamentarian ruled against the $15 minimum wage increase in the COVID-19 reconciliation bill. So, anything is possible.

The other is if a moderate red-state senator like Joe Manchin (D-WV) feels the party is going too far with reconciliation bills. In an evenly divided Senate, all that’s needed to kill a bill is for one Democrat to go against the leadership and vote with a united GOP. He already struck a blow to Democrats this week over DC statehood. He could do it again.

Sometimes when a person acts like a schoolyard bully, they need to be reminded they don’t hold all the power. This week in Texas, a Democrat lost big in a special election. The midterm ballot box creeps closer every day. Soon enough, America will have a chance to end this charade, and all signs are pointing to a GOP takeover of the House, and perhaps even the Senate.

For many, it can’t come soon enough.