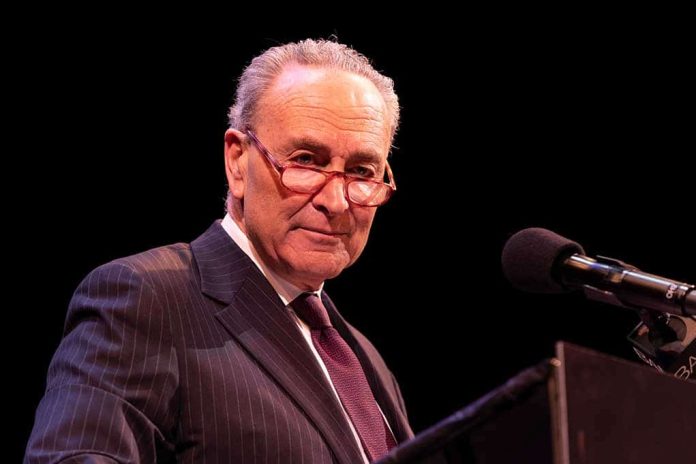 (RightWing.org) – Here we go again… the Democrats are attempting another exercise in futility. Instead of focusing on issues that Democrats and Republicans can agree on, the Left wants to federalize the election system that could make the elections less stable, more prone to hacking, and easier to cheat. What could possibly be their motive?

On Thursday, October 14, Senate Majority Leader Chuck Schumer (D-NY) announced he is bringing the dangerous and reckless John Lewis Voting Rights Advancement Act up for a vote next week to proceed to debate the legislation. Yet, Schumer already knows he doesn’t have 60 votes in an evenly split Senate so the bill is dead on arrival. So, what’s this really about?

Desperate Democrats Must Show Leftwing Base They Are Doing Something

The Democratic Party is eating itself alive as the Left’s two-track infrastructure deals are dying on the vine. Since January, they have absolutely nothing to show for their efforts. There is no legislative success on any front to this point, except for the partisan COVID-19 relief package that contributed to the massive inflation spike America is enduring.

On Thursday, moderate Sen. Kyrsten Sinema (D-AZ) announced that she would not vote on Biden’s semi-socialist reconciliation bill until the bipartisan $1.2 trillion infrastructure bill is passed in the House and signed into law by President Joe Biden. It’s another dagger to the heart of left-wing Democrats who started the year so hopeful.

The infighting over the deals is causing major headaches for Democrats who wrongly believe their hopes in the 2022 midterm elections rest upon the massive spending bills. Now, it appears that America is souring on their plans as a new Gallup poll reveals America doesn’t want a bigger government.

If the public doesn’t like the big-spending plans, they likely won’t approve of a federal hijacking of elections, which the John Lewis Voting Rights Advancement Act would accomplish. As the spending plan spirals towards potential failure thanks to the Big Tent of the party, it’s time for Democrats to shift the argument to something that rallies the base.

That’s all this is about. The Left is dejected and Moderates are upset that the party is forcing them to go against their constituents in red or purple congressional districts. Yet, if given the right circumstances, Centrists would vote for something over nothing. The Moderates are in a tough spot. If they balk too much, they’ll get tagged by the Left as Republican sympathizers and get primaried by extreme progressive candidates. That would be a best-case scenario for Republicans.

Senate Minority Leader Mitch McConnell (R-KY) is setting the moderate Democrats up for failure come the 2022 general election. In February, the GOP announced a list of 47 vulnerable Democrats it will target after the first of the year. If Moderates balk and lose to far-left candidates, Republicans will be in a prime position to take the seat. If they vote with the Left, the GOP will leverage it to show how out of touch they are with their own voters. Again, they would be prime to win the seat.

So, in either case, Schumer and House Speaker Nancy Pelosi (D-CA) are throwing the Moderates under the bus. This is a declarative statement that Moderates are no longer wanted in the party if they obstruct the Left’s agenda. It could be a foolish long-term political miscalculation. Right now, Democrats have a lot going against them with the public. Defund the police, Critical Race Theory in public schools, inflation, potential mass job losses due to vaccination-mandated firings, and foreign policies disasters are adding up to be a colossal disaster for Democrats.

As election season kicks off after the first of the year, Conservatives should prepare themselves for a battle. When Democrats start losing, the attacks will come out. Charges of racism, sexism and whatever “ism” they can think of will dominate their message. Conservatives can’t get caught up emotionally in the attack. Instead, just keep pressing the facts of the condition Democrats put America in. Draw the contrast that the Left is about division while the GOP fights for solutions.

Good luck, America. The Democrat’s election reform proposal isn’t about leveling the playing field. It’s about creating an uneven one that favors Democrats. It isn’t going to happen.