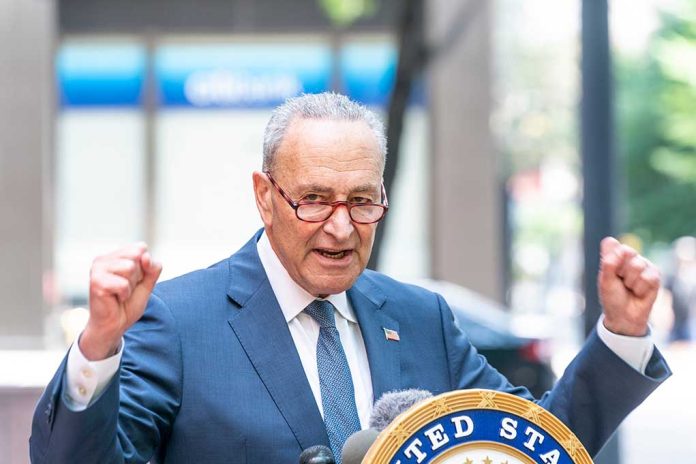 (RightWing.org) – If Senate Majority Leader Chuck Schumer (D-NY) gets his way, the US Senate will no longer be a check and balance on the House of Representatives. The Founding Fathers anticipated that the House would be wild, out of control, and highly partisan to its constituencies’ cravings. Therefore, the Senate was created as a deliberative body where partisanship wouldn’t be as extreme.

Unfortunately, Schumer is ready to change to rules and make the Senate into a glorified House under one-party rule. As he does, the tensions are growing as President Joe Biden and Senator Mitch McConnell (R-KY) weigh in on the matter.

Why Is the Filibuster Important?

While the US Constitution created the institutions of government, it didn’t specify the rules for day-to-day operations of how the government conducted business. That was left up to each branch, and in the case of Congress, each chamber. A filibuster is a tradition in the US Senate that allows for extended debate or delay of legislation, resolutions, or amendments by a minority party. It’s the best path to kill a proposal by the majority party from becoming law.

Before 1917, the Senate rules didn’t provide a way to end debate on an issue and force a vote. The Senate at that time created a new rule called “cloture,” which made it possible for the Senate to end debate and call votes. Today, 60 of the 100 members of Congress can vote for cloture.

For all of Chuck Schumer’s long career as a US Senator, he staunchly defended the filibuster as a necessary tool of the Senate. As recently as 2017, he bemoaned the end of the filibuster when then-Senate Majority Leader Mitch McConnell (R-KY) and GOP Senators successfully ended the filibuster for Supreme Court nominees. However, Republicans took action after Democrat’s hastiness to set a precedent to end the long-held tradition and push through federal judge nominees on party-line votes in 2013.

What’s being proposed today is much different and more consequential than in 2013 or 2017. The reality is that Schumer is no longer a liberal. Like most Democrats, he swung to the far-left in recent years. As the House passes one piece of far-left legislation after another, it goes to the Senate, where it dies for lack of support.

In an evenly divided, partisan Senate, Democrats can’t collect the 60 votes they need to pass their agenda. Schumer’s only workaround is to end the filibuster altogether and make all legislation a simple up or down vote.

Tensions Flare as McConnell Threatens to Suspend the Senate

It’s improbable that Schumer’s threat will pass in the evenly divided Senate. President Biden is proposing a much less extreme measure that would still ensure the same result in the end. As a result, tensions are flaring.

Sen. Mitch McConnell is warning of a “scorched Earth” possibility if Democrats pursue the filibuster’s end and ram their legislation through the Congress. To prevent that from happening, McConnell could use every parliamentary procedure in the book by grinding business in the upper chamber to a complete halt. The GOP could refuse to allow routine operations, such as when session times start, reading thousands of pages of legislative texts, and quorum call votes.

Democratic Sens. Joe Manchin (D-WV), Krysten Sinema (D-AZ), and Jon Tester (D-MT) say they will never agree to end the filibuster. Assuming they hold to their word, Schumer and Biden are offering veiled threats. Then again, they are Democrats, and Democrats rarely go against their leadership.

While it may not happen today, Schumer and Biden are making it plainly clear that if Republicans don’t get on board with their agenda, they’ll try to find a way to enact it with or without them. Their past statements couldn’t make today’s hypocrisy any clearer.

It appears that Democrats only believe in one-party rule — theirs — as they strive to enact the farthest-left agenda in US history.