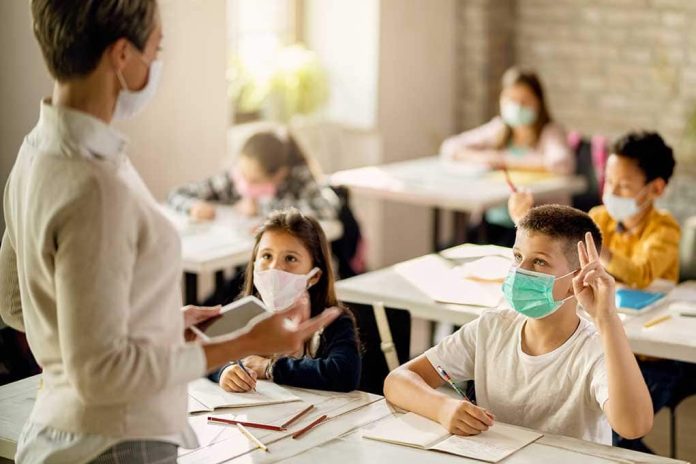 (RightWing.org) – Over the summer months, school boards, administrators, and teachers became the focal point of the culture war in America. For decades, Conservatives rightly focused on the media, who pushed leftist agendas to transform society through news and entertainment. However, under the surface, schools are actively and stealthily engaged in culture wars.

School boards meet during the year to discuss a range of policy issues and authorize spending of taxpayer dollars. At any given time, especially during COVID, the attendance of those meetings is virtually nothing. That allows school boards to run their districts in opposition to many community values, but few parents know or care.

It’s an odd statement, but perhaps governors did America a favor, at least in one area, by shutting down America during the pandemic. Previously, parents rarely caught wind of what teachers were sharing with students. For the first time, thanks to online school, parents could actually overhear how educators were influencing their children. Some didn’t like it.

Then, it happened. Spring turned to summer, and discussions of returning to the classroom began. Critical Race Theory (CRT) took center stage as parents started questioning administrators and school boards about what they intended to teach their children.

While CRT continues to simmer, mask and vaccination mandates join the chorus of voices opposed to school district rules that could harm children even more. The pandemic awakened a giant sleeping beast, and disgruntled parents are growing tired of school boards acting as if the parents work for them.

If you think about it, the culture war in schools isn’t new. What’s new is that parents are finally pushing back against school boards and administration teaching everything but math, science, history, and reading.

School’s Were Always on the Front Lines

For generations, woke college professors taught today’s administrators and school teachers to propagandize against traditional moral values. What occurred was a transfer of liberal ideals at college to the K-12 environment.

It used to be that religion in schools was a big no-no. Anti-religious zealots created an entire movement dedicated to prohibiting students of faith from participating in National Day of Prayer events around the school flagpole. The Left also tried to stop students from praying together before school in classrooms.

Over the years, sex education in public schools created the most tension and debate in communities.

America is a long way from the controversies of the past.

In the last few years alone, public school students learned to deal with transgender issues. In some schools, administrators allowed transgender boys to compete in girls’ sports. Under President Joe Biden, the federal government is wielding its influence, forcing school boards who don’t get on board to accept the “new” normal.

So, while many try to tell you that schools are now the front lines of the culture war, that’s not entirely accurate. The fact is, public schools were always on the cutting edge of societal transformation. The only difference between the last forty years and now is that parents are observing the insanity for themselves, and many don’t like what they see.