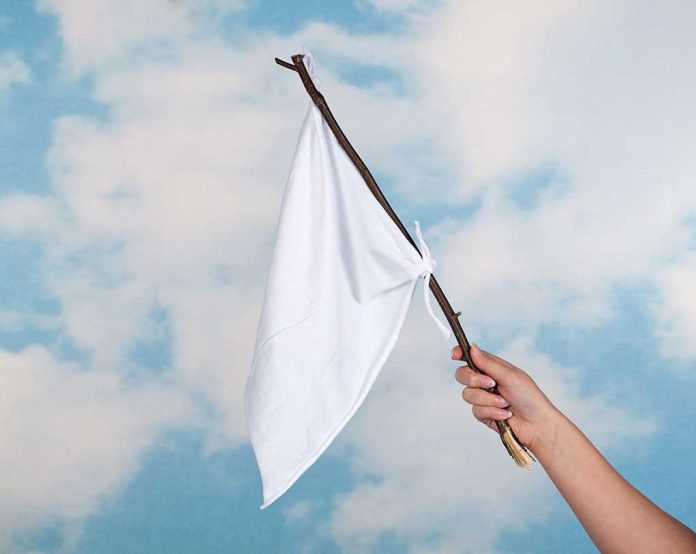 Russian Troops Put Up White Flag as They Surrender

(RightWing.org) – New frontline video shows Russian troops surrendering without even trying to put up a fight. Ukraine recently opened a hotline for the invaders to call if they’ve had enough of the war, and says thousands have used it already. It looks like the troops in the video were among them.

Video taken near Kherson, in southern Ukraine, shows a Russian BMP-2 infantry fighting vehicle with a white flag tied to the vehicle’s gun barrel. The vehicle, which can carry seven infantry plus a crew of three, approaches a Ukrainian unit that seems to be expecting it; the crew members then dismount and are disarmed and searched before being taken prisoner.

Because the BMP crew’s surrender looks like a pre-planned event, there’s speculation that they had taken advantage of Ukraine’s new surrender hotline. This was set up to allow Russian troops to concede without waiting until they encounter enemy troops. Ukrainian military intelligence says over 2,000 people have already called the number.

According to spokesman Andriy Yusov, they include men who’ve just been mobilized under Vladimir Putin’s reinforcement plan, as well as troops already deployed with the invasion force. In other words, some Russian soldiers are arranging their surrender before they even go to war.