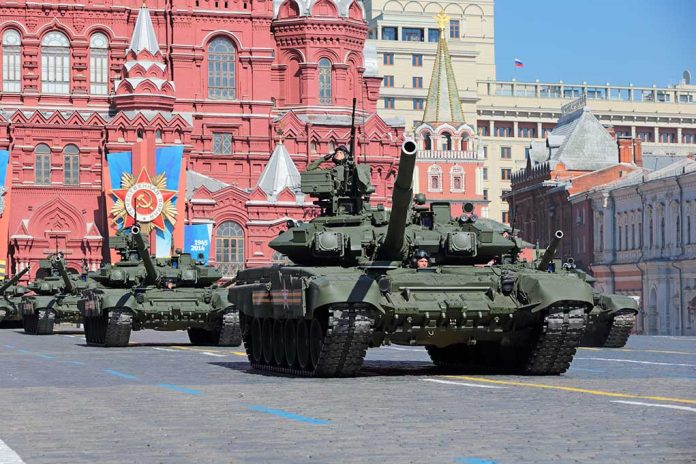 Russian Tanks Are EXPLODING Due To THIS “Fatal Flaw”

(RightWing.org) – Last week, the Ukrainian army released dramatic video of a Russian tank fireballing after being hit by artillery. In fact, this is a common event. Hundreds of Russian troops have died in Ukraine, killed by the design of its own tanks.

#Ukraine: A Russian tank was evaporated somewhere in the Donbas. pic.twitter.com/BYwr9jHOGv

Footage released by Ukraine’s Operational Command North on July 6 shows Ukrainian artillery bombarding a Russian tank, causing a catastrophic explosion that blows the entire turret off. It’s known as the “Jack-in-the-box” effect, and it affects every tank in Russian army service.

Western tanks have four crewmen: a commander, gunner, loader, and driver. The loader takes shells from the racks and loads them into the gun, and those racks are protected. In the US M1, the racks are in the rear of the turret; there’s an armored door separating them from the fighting compartment. Panels above the door are designed to blow out, so if the shells do explode, the blast vents safely upwards. The British Challenger 2’s stores its ammunition in tubes set into the fuel tanks, where the diesel fuel can buffer the shock of a hit.

Russian tanks — the T-64, T-72, T-80 and T-90 — are different. There are only three crewmen, which means their tanks are smaller and lighter while still being heavily armored. They do that by replacing the human loader with an autoloader, which feeds shells from a revolving carousel on the turret floor. The carousel is armored but only holds 28 shells (22 in the T-64). The rest of the shells are stowed inside the turret — and the racks aren’t protected. That means a hit can ignite the propellant charges and spark a chain reaction that detonates all the ammunition and catastrophically kills the tank and its crew.

President Vladimir Putin knew all this before he sent his army into Ukraine — but he sent them anyway.