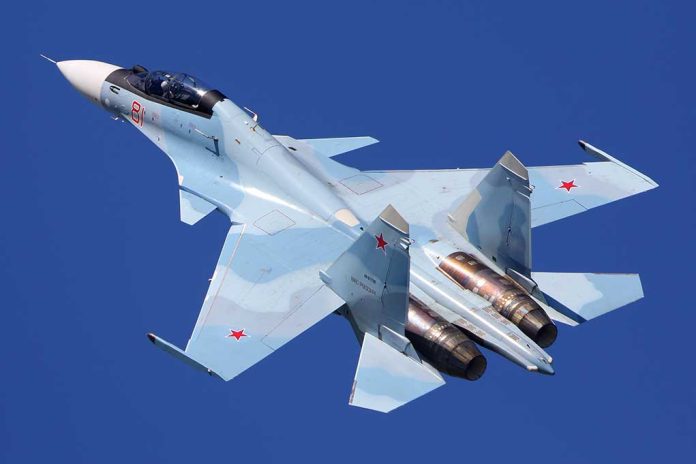 (RightWing.org) – Over the last six months, Americans endured a painful and embarrassing military withdrawal from Afghanistan, skyrocketing inflation, warnings about COVID-19 and new restrictions in some areas of the country, and numerous threats to Constitutional protections. The cascading number of negative issues continues to drive down President Joe Biden’s approval ratings as he struggles to get much done for America that most citizens can agree on.

Now, a major geopolitical issue could risk making America look even weaker on the world stage. Recently, Russia created a list of demands as it built a heavy military presence on the Ukrainian border. Among them is a withdrawal of NATO from smaller countries such as Poland and Georgia that sit along Russia’s western border as Ukraine considers joining the US-European military alliance. While many countries around the world question America’s strength and resolve, Russia is signaling it’s prepared to go to war if the US and NATO don’t meet its demands.

In 2014, Russia annexed the small area of Crimea and took it by force, which was part of Ukraine at the time. Then-President Barack Obama did little to stop Russia. Today, America is perceived to be vulnerable. President Biden appears more ready to be friends with foreign powers than a respected adversary. Both China and Russia learned much about Biden during the botched and chaotic military withdrawal from Afghanistan.

Recently, Russian President Vladimir Putin signaled he was prepared for military conflict to protect his country’s national security concerns regarding NATO’s protection for smaller countries around Russia’s border. Russia sees NATO as a direct threat and wants it removed immediately.

On Saturday, December 18, Konstantin Gavrilov, head of the Russian Delegation in Vienna on Arms Control, told the Russian media that the “moment of truth has arrived.” He stated that NATO countries must withdraw, or their military-technical and military response (to overtake Ukraine) would be the only alternative.

The Biden administration says it’s willing to discuss some of Russia’s terms, but warned the only answer was for Russia to de-escalate. It appears that Russia is running in the opposite direction quickly as Ukraine considers joining NATO.

Congressional lawmakers say that Russia created a pretext for war. Both Democrats and Republicans support the administration’s threat to heavily sanction Russia’s economy if it acts militarily. Lawmakers also say they agree with sending military aid and assets to Ukraine.

The question is, can Biden walk and chew gum at the same time if the US gets embroiled in a dangerous international issue? To this point, the sole focus of Biden and Congressional Democrats has been their semi-socialist Build Back Better agenda. Are they willing to scrap it to focus on international affairs?

It’s hard to know, but this much is possible. If Biden gets us in a military conflict, he better be prepared to win. The other side of the coin is that he better win the diplomatic war since many doubt he has the resolve to win a war. Either way, Russia perceives him as weak. How the US government handles Russia will signal to China if we’re prepared to protect Taiwan.

This could be an interesting situation with significant domestic and international implications.