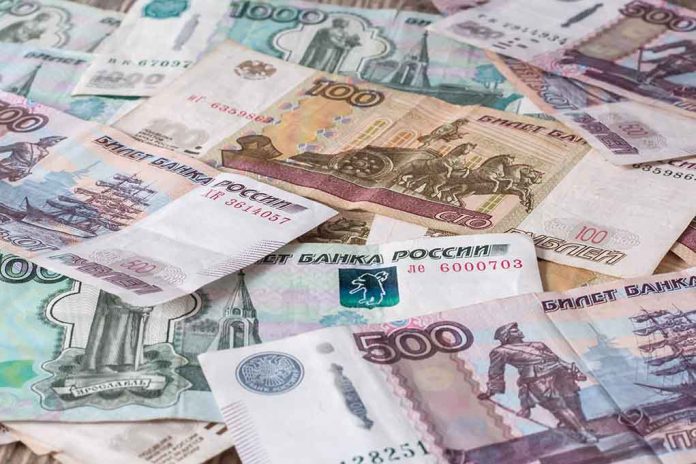 (RightWing.org) -In 1933, President Franklin D. Roosevelt was in the fight of his life as he worked diligently to rescue Americans from the devastating impact of the Great Depression. America lost confidence in the dollar and made a run on banks. The president forbade financial institutions from paying out large sums of people’s money and paying people with gold instead of cash. Months later, Congress passed legislation that prevented creditors from demanding payments in gold. In 1971, President Richard Nixon ended the US government practice of converting dollars to gold and officially abandoned the gold standard.

In 1944, the US dollar became the world currency, which the US government-backed by its good faith and credit. Its powerful position in the world allows the United States to impose swift and economically damaging sanctions on countries whose actions we disagree with, including Russia and North Korea. Unlike North Korea, Russia may have the means to fight sanctions by converting its economy back to the gold standard and demanding payments for oil and natural gas in gold instead of dollars.

Addressing the economic sanctions against his country, According to Market Watch, Russian Parliament head Pavel Zavalny said the way to protect Russia’s wealth is to transfer its internal assets to gold. If Russia moves in that direction, it could change how the world conducts business.

Russia is the third-largest supplier of oil and natural gas in the world. Zavalny said Russia is delighted to sell its overabundant supply of energy resources, but only in hard currency and not in dollars. One could consider the idea as a way for Russia to impose indirect sanctions on the United States. Zavalny said if governments or energy companies want to purchase Russian oil and natural gas, they can pay in gold, which is now the Russian national currency.

By itself, the Russian move to make gold its currency standard may not mean much. Yet, suppose other countries, such as China and India, embrace the idea and move away from the dollar as their currency standard. In that case, it could strip the US from controlling international issues and curbing what US officials believe is bad behavior by some countries.

Unlike government monetary values, which are public, gold is a private asset independent of banking systems. It can’t be controlled by any country. Some countries say the US shouldn’t be able to weaponize economies, and Russia, among other countries, may use gold to get around sanctions.

The world’s gold supply is valued at approximately $13 trillion. The more gold is bought, the less of it is floating around, thus it becomes more valuable. By linking the Ruble to gold, Russia is altering global trade and changing the international monetary system. The US can’t sanction gold; either one owns it, or one doesn’t. Some who does will always trade it for what they need.

On March 15, the Wall Street Journal wrote that the weaponization of the US dollar by the Biden administration was destructive and could cause it to collapse. So, the economic policies meant to curb bad behavior could come back to harm Americans. In early March, President Joe Biden warned that economic sanctions could hurt the US economy over the short term. But in the long term, is he wrong?

If gold becomes the global reserve currency once again, what would it do to the value of the dollar? What would it mean for the US global power?

All good questions we don’t have any answers for, yet.