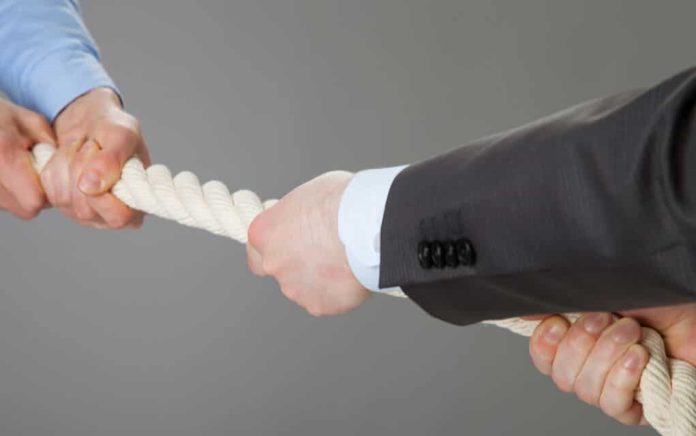 (RightWing.org) – It’s beginning to look like Democrats see the writing on the wall as the 2022 midterm elections start creeping closer. In 2020, political prognosticators expected Republicans to lose a significant number of seats and hand Democrats a sizable majority in the House. That didn’t happen. Instead, not a single incumbent Republican lost, and they defeated moderate Democrats to give House Speaker Nancy Pelosi (D-CA) one of the slimmest majorities in nearly a century.

The 220 to 212 Democratic House majority is in very real danger, and the Senate isn’t far behind. While one might believe that redistricting of the House is the reason, that wouldn’t explain the Senate, which is a statewide office. As President Joe Biden’s approval rating continues to collapse week after week, a pattern is settling in that Democrats are in denial of: the GOP is poised to take back the Congress as America rejects their agenda.

Are Democrats in Denial?

In interview after interview, Democratic leaders allege that the American people love their far-left agenda. Is that true? There’s one way to know for certain. If Republicans take back the House and Senate in November 2022, they won’t be able to say that any longer. That’s why they are trying to get their semi-socialist plan passed and signed into law now.

If it passes, it won’t matter if America approves of it or not in November 2022. It would be impossible for the GOP to get rid of the law without a Republican president if they take back Congress. Even then, it’s still hard to get rid of government programs once politicians pass bills into law that dole out benefits to voters. Just look at Obamacare.

The political rhetoric from the Left may sound like Democrats are in denial. They are not. They are fully aware that the headwinds are blowing against them. Incumbency is an incredible advantage. Yet, for Democrats in districts turning redder, it’s becoming harder to win re-election.

On Wednesday, October 6, Rep. Ron Kind (D-WI) shocked the political world when he announced he decided against running for re-election. He only won by 10,000 votes in 2020, and his district gets redder every election.

Numerous House seats are trending red across the country. Rep. Cheri Bustos (D-IL) is retiring from a district that Trump won in 2020. In Ohio and Pennsylvania, Reps. Tim Ryan (D-OH) and Connor Lamb (D-PA) are not running in their districts and seek to win in challenging Senate races. Rep. Charlie Crist (D-FL) is abandoning his seat to run for governor against popular GOP Gov. Ron DeSantis. Democrats struggle to find candidates to run in the Miami area in some Florida Congressional districts where Trump and the GOP did better than expected in 2020.

Odds Are With the GOP

On Wednesday, Newsweek argued that odds are with the GOP next fall. The article cites the aggregator site US-Bookies, which predicts that Republicans have a 71.4% chance of taking back the House, and Democrats in the Senate only have a 32% chance of holding on to the upper chamber.

Midterm elections tend to be a referendum on the party in charge. If Biden doesn’t recover from collapsing poll numbers soon and independents continue to sour on the Democratic agenda, the party could be in serious trouble come election time.

While things look good for Conservatives, there’s no reason to take the foot off the gas and coast. Nothing is guaranteed to happen, and 13 months is an eternity in politics.