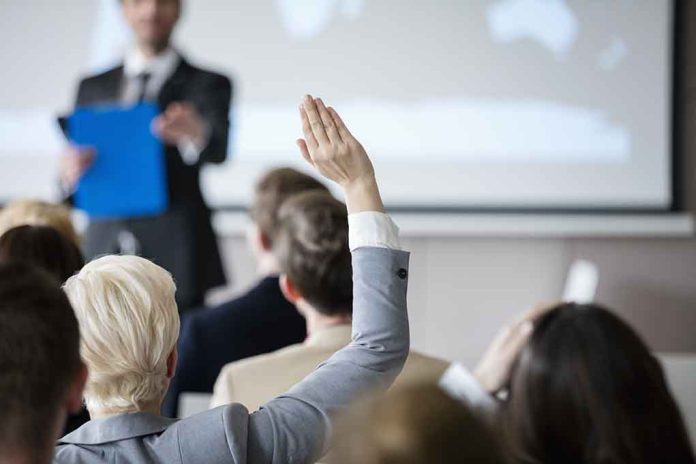 (RightWing.org) – On January 25, former President Donald Trump released an official statement offering his “Complete and Total Endorsement” of his former State Department spokesperson Morgan Ortagus should she decide to run for Congress during the upcoming midterm elections. However, a recent report claims she secretly vowed alliance with the Biden administration in an email distributed to State Department officials immediately before her departure.

On January 26, The National Pulse published excerpts from a copy of Ortagus’ email obtained from an unnamed source(s). According to the exposé, Ortagus praised her replacement, Ned Price, calling the Biden appointee “fantastic.” She also vowed to “faithfully [serve] the incoming Biden administration once she returned to duty in the US Navy Reserves.

Continuing its report, The National Pulse claimed that Trump’s endorsement ruffled more than a few feathers within the former President’s Make America Great Again base. Reportedly, insiders speculated Donald Trump endorsed Ortagus due to her recent engagements with his daughter, Ivanka Trump.

In an unexpected twist, The National Pulse claimed Ivanka and her husband, Jared Kushner, “were best known” to White House insiders for “promoting ‘moderates’ and ‘Never Trumpers,’” who later turned on the former president.

What do you think? Should President Trump have offered Ortagus his full endorsement? Have you heard any rumors that Ivanka promoted or otherwise worked to support “Never Trumpers?”