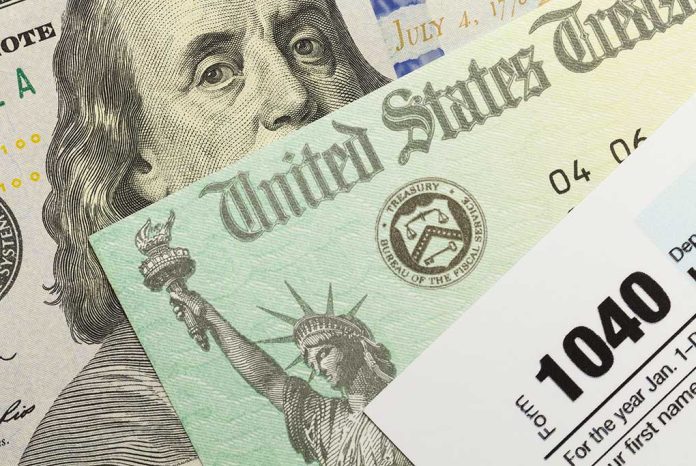 IRS Report Finds Something Very Unusual… Are Your Returns Among Them?

(RightWing.org) – Is it possible that while inflation makes you poorer, the government could get richer? Based on the amount of revenue the government is raising through taxes, that may just be the case. On Wednesday, May 25, the Congressional Budget Office (CBO) reported that federal revenues increased by $800 million this year. That’s the largest hike in more than 40 years and 18% higher than in 2021.

So, what’s driving this rare and unusual event? According to an analysis by Penn Wharton Budget Model (PWBM), American households paid hundreds of billions of dollars more than they normally would through their 2021 tax returns. So, what’s driving the higher tax receipts, and who’s benefiting?

Wharton’s analysis determined that April 2022 payments of non-withheld individual income taxes exceeded $522 billion. That was nearly double the $246 billion the IRS collected in May 2021, when the government extended tax filing deadlines by a month.

The study determined that increased household wealth drove the increased payments to the IRS. Researchers said that household equity rose 40%, the fastest since 1990 during the dot-com bubble burst.

So, it appears that higher wages to attract workers back to the workplace as the economy rebounded from COVID lockdowns in 2020 and early 2021 worked against Americans. Still, that’s not the whole story.

If you watch or read the news, you may have heard that inflation acts as a tax on Americans. According to the CBO report, the rise in government revenues corresponded with the increase in inflation. Not only did inflation eat away at the value of one’s money, but the government took more of it as people earned more in higher wages. It was a double whammy.

Businesses paid more to employees to keep them and then raised prices to compensate. In both cases, tax revenues to federal, state, and local entities increased.

Capital gains taxes also played a role in the larger than normal share of money flooding the government coffers. In 1997, Congress amended the tax code so that $500,000 of profit on a jointly-owned home between spouses was tax-free. Yet, home values have more than doubled since then, and in some cases, increased dramatically over the last two years. It’s not inconceivable that many people paid capital gains taxes if they sold their homes.

Leonard Burman, a fellow at the Urban Institute and co-founder of the Tax Policy Center, told CNBC that Congress purposely designed the system to work this way. Burman said the intent of the exemption was to decline over time, which allowed a phase-in of a tax increase without Congress creating a new law that would be fresh in voters’ minds.

In addition, higher wages and inflation are causing people from social security recipients to higher wage earners to pay taxes.

Still, the Tax Foundation showed how President Joe Biden proposed raising income tax rates to the highest in the world.

So, who does all this benefit?

It’s probably not you if you’re the one paying the increased taxes. Instead, it helps the government loaded with politicians ready to figure out how they can spend that money on social programs if they believe it will help them get elected or re-elected.