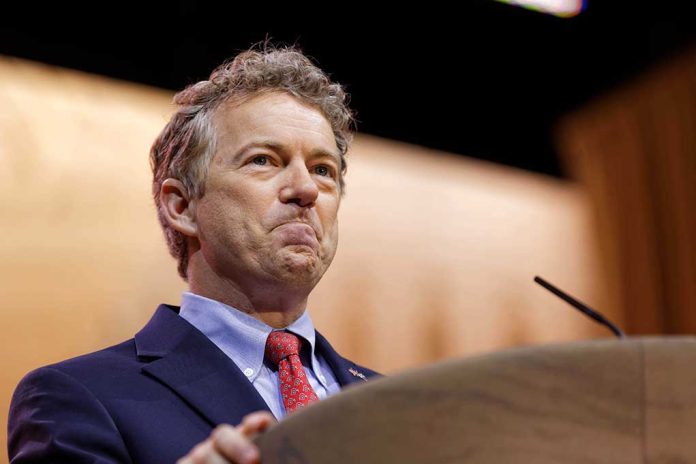 (RightWing.org) – Sen. Rand Paul (R-KY) recently attempted to halt the provision of US funds for gain-of-function research (GoFR) in China by introducing an amendment to the CHIPS and Science Act. While that plan didn’t work, he did make history by holding the country’s first congressional oversight hearing on the practice.

On Wednesday, August 3, the Senate Emerging Threats and Spending Oversight subcommittee (ETSO) conducted a hearing on GoFR and the lessons learned from the coronavirus pandemic, with Democratic Sen. Margaret Hassan (NH) and Sen. Paul serving as its chair and ranking member, respectively.

"Revisiting Gain of Function Research: What the Pandemic Taught Us and Where Do We Go From Here"https://t.co/nGhJgTvFVl pic.twitter.com/bdhUB3HoNM

For those unfamiliar with the term, GoFR involves genetically boosting an organism’s potency to develop treatments for diseases.

The National Institutes of Health (NIH) briefly halted all GoFR in October 2014 until it established a proper set of risk assessment protocols in late 2017. However, Paul’s office sent an email to The Epoch Times explaining the senator believes the term remains impermissibly vague.

Sen. @RandPaul is set to lead the first congressional hearing on #GainOfFunction research as part of his ongoing efforts to investigate the origins of #COVID19. https://t.co/LgC6iE7x9B

Additionally, his office said, “serious questions remain” regarding the sufficiency of current practices to protect against the “potential negative consequences” of the dangerous research technique.

Paul also aimed to use the hearing to springboard his efforts to ban the use of US taxpayer funds for GoFR projects conducted in Chinese research facilities. He recently noted that “dangerous research conducted” by a “totalitarian country” is “simply too risky” to bankroll.

Do you agree that it’s time for Congress to halt funding dangerous research projects overseas?