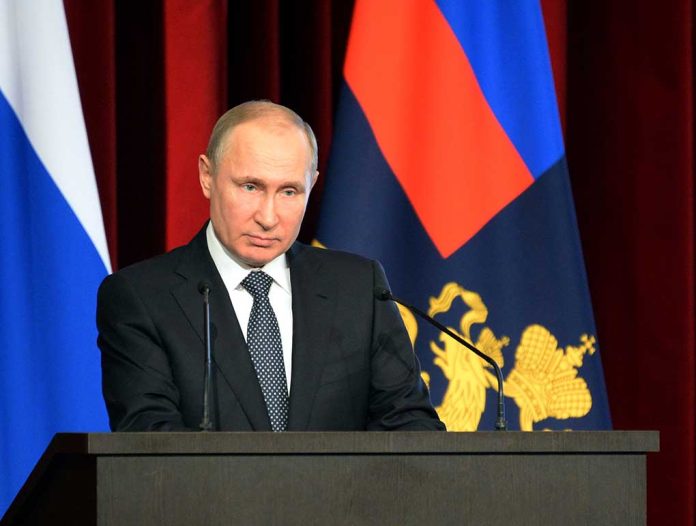 (RightWing.org) – In 1970, The Treaty on the Non-Proliferation of Nuclear Weapons (NPT) became the leading force in preventing the spread of these deadly devices and promoting peaceful technologies. Since 1970, 191 nations have signed the treaty, including five with nuclear capabilities. The United Nations (UN) says it is the most adhered to multilateral disarmament agreement. While Russia is a member state in the NTP, it’s blocking consensus on a (required) review and re-approval of the treaty.

The rules of the agreement say that the NPT must be reviewed every five years by participating governments. In 2020, the parties agreed to delay it for two years due to the COVID-19 pandemic. On Friday, August 26, the Russian Federation balked at the language in the treaty as its military poses a grave risk to the largest atomic power plant in Ukraine and all of Europe.

Some believe Russian President Vladimir Putin is enacting a political ploy by blocking the final passage of the NPT. By agreeing to the language in the revised document, Russia would have to acknowledge its military poses a threat to Zaporizhzhia’s nuclear facility in Ukraine. Over the last several months, the international community has been pressuring Moscow to demilitarize the zone around the power plant over concerns it could cause a disaster.

Deputy Director of the Russian Foreign Ministry’s Non-Proliferation and Arms Control Department, Igor Vishnevetsky, stopped the consensus process. He argued numerous countries had various issues with the final draft of the 36-page document.

The revised draft of the treaty includes four references to the Zaporizhzhia plant over concerns about military activities in and around the energy station. One of the main sticking points is the treaty would call on the Kremlin to ensure Ukrainian authorities gain control of the facility from the Russian military.

Vishnevetsky called the references to the power plant “blatantly political in nature.”

On Sunday, the US State Department released a statement saying the treaty remains strong regardless of Moscow’s obstructionism. The government again called on Russia to turn control of the station over to Ukraine and to end military activities near the site. It added the US would continue to pursue peace and security globally without nuclear weapons.

Indonesia, speaking on behalf of 120 developing countries, said they were disappointed in the conference’s inability to pass the revision and called it of the “utmost importance.”

Yann Hwang, France’s ambassador to the Conference on Disarmament in Geneva, read a statement on behalf of 56 countries and the European Union (EU). Hwang stated they unwaveringly support Ukraine and criticized the Kremlin’s dangerous rhetoric, actions, and provocations. He added that Putin undermined international peace and the NTP’s objectives by waging an illegal war against its neighbor.

Some say the failure to pass the revised NTP was a missed opportunity to strengthen it. Still, the agreement remains in effect as-is until member states agree to modify it in the future.