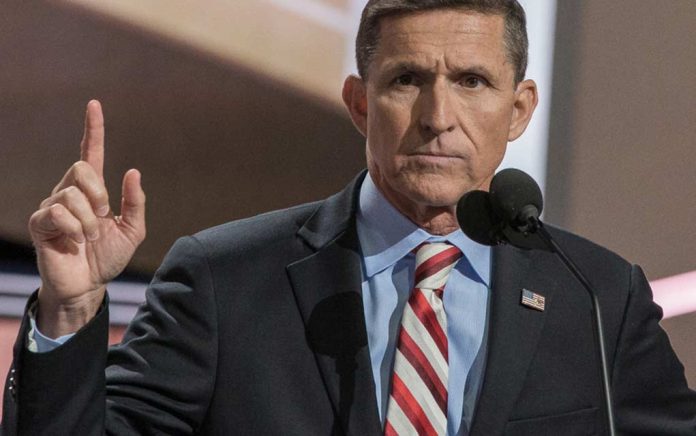 (RightWing.org) – It all started with the groundbreaking unveiling of documents revealing how former National Security Adviser (NSA) Michael Flynn was mistreated by the FBI. He was set up to plead guilty in 2017 of lying to investigators. Since then, the DOJ has dismissed their case and the whole mess has quickly spiraled out of control for Democrats. With the judge putting up roadblocks to Flynn’s vindication, it’s raising an interesting question: Should President Donald Trump just go ahead and pardon Flynn?

Attorney General William Barr ordered the investigation into the Flynn case, which was previously deemed closed. That’s how the documents were found. Barr has since moved to dismiss the charges against Flynn.

Even now, the story’s developing at lightning speed. The judge in the original case against Flynn is refusing to drop the charges, for now, instead calling for amicus briefs and looking into other charges against Flynn like perjury. Calling Flynn a liar because he recanted previous statements he was manipulated into making is just another miscarriage of justice.

These steps and the ensuing delays are postponing what should be the eventual justice Flynn deserves. But, nothing is guaranteed if the court continues its proceedings.

Of course, delaying Flynn’s justice through the courts isn’t the only option — President Trump could pardon Flynn and either commute his sentence or remove it altogether.

A Solution Not Without Its Problems

A presidential pardon would ensure that Flynn is not wrongfully punished, but the original verdict of “guilty” would remain. So, pardoning him would drop his sentencing, but not legally recognize that he’s innocent.

This could damage his career in the future without an innocent ruling by a judge. With such a high-profile case, this fact would stick with Flynn forever, regardless of the FBI’s misconduct that led him to plead guilty. A pardon from Trump, no matter how well-intentioned, may not be in Michael Flynn’s best interest.

And, pardoning isn’t out of the wheelhouse with Trump. The president did so with a handful of individuals earlier in 2020, including Rod Blagojevich, former Democrat Illinois governor. Dems attempted to call this set of pardoning politically motivated, but no one on that list was connected to each other or even shared similar political affiliations. They might try to paint a potential Flynn pardoning as politically biased, but history shows that Trump is more interested in justice than partisanship.

While Flynn did plead guilty in 2017, he testified when the case was deliberately and unjustly stacked against him. A pardon would remove his sentencing, but the verdict of “guilty” would remain, which could do more harm than good. Should President Trump pardon Flynn to avoid these delays in justice?