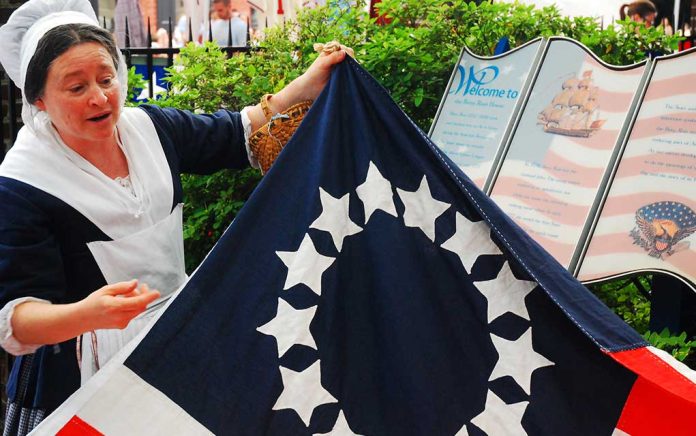 Colin Kaepernick threw a huge fit over Nike’s Betsy Ross sneakers recently. The public outrage was so intense that Nike decided to pull the shoes from production to avoid offending the wrong person. Does the Betsy Ross flag or these sneakers offend you?

The flag’s history dates back to the original 13 US colonies. Legend has it that George Washington walked into Betsy Ross’ shop in 1776 and asked her to create a flag with 13 stripes and 13 stars. It would represent the 13 colonies that broke away from Great Britain to create the independent United States of America.

Betsy Ross’ flag is commonly associated with slavery and racism, though. There’s no direct correlation between the flag itself and slavery. The Left justifies the racist association by saying the flag was made during times when slavery was legal.

It’s one thing to talk about true racism (like the KKK burning crosses in African-Americans’ yards) and another to pin a racist connotation through unrelated historical context. The Romans flew their eagle standards into battle and also had slaves of certain races. Does that make the eagle standards racist?

This would be a different conversation if the Betsy Ross flag was directly associated with racism, but it’s not. It’s tangentially related at best. There could be other factors that play into the Betsy Ross flag being offensive to some people, but right now racism is the main culprit.

Does the Betsy Ross flag offend you because of potential racism or other reasons? Tell us what you think!